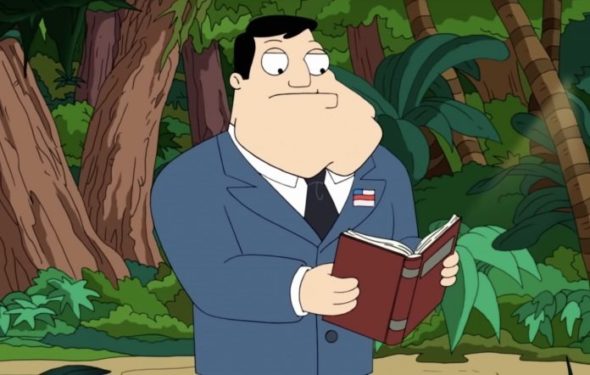 American Dad! is returning to TBS this fall with the remaining episodes of season 17. The cable channel has released a trailer teasing the return of the animated series. The show has already been renewed for seasons 18 and 19. The series’ future had been in doubt since other TBS shows have been cancelled in the wake of the WarnerMedia-Discovery merger.

TBS revealed more about the series return in a press release.

“American Dad!” centers on super patriotic CIA agent Stan Smith (voiced by Seth MacFarlane) and the misadventures of his unconventional family in Langley Falls, VA. Stan applies the same drastic measures used in his job at the CIA to his home life, where Stan’s blissfully unaware wife, Francine (Wendy Schaal), has an unfaltering loyalty that makes her blind to his unabashed arrogance. His left-wing activist daughter Hayley (Rachael MacFarlane), however, doesn’t let him off so easily and knows just how to push her father’s buttons, unlike her dopey, well-intentioned husband Jeff (Jeff Fischer) who doesn’t know much of anything. Son Steve (Scott Grimes) is a geeky-yet-confident kid who spends his time playing video games and obsessing about the opposite sex. The Smith cabinet is rounded out by two rather unconventional members: Roger (MacFarlane), a sassy, sarcastic and routinely inappropriate space alien, and Klaus (Dee Bradley Baker), an attention-starved goldfish with the brain of a German Olympic skier.

This season also features a special guest lineup including Terry Crews as Heinrich Brown, a ruthless insurance adjuster hellbent on bringing bad drivers to justice but trapped behind the façade of his macho exterior is a tender man with a song in his heart; Jared Harris as Merlin, a busy, always on-the-go, multi-hyphenate, wizard. Even though he’s the most powerful being in his realm, Merlin still relies on a team of employees to help juggle his numerous projects and appearances; Laurie Metcalf as Eilzabeth, a leading egg scientist and researcher at Groff Community College; Jason Isaacs as Jumpers, the leader of a manipulative gang of frogs – he’s as evil as he is charming, and he’ll stop at nothing to make sure he gets what he wants; and Patti Harrison as Ali, a really cool sophomore girl who pops ghost peppers like they’re nothing, and thinks love doesn’t exist. Steve can’t resist her.

Check out the trailer for the return of American Dad! below.

What do you think? Are you a fan of the American Dad! series on TBS? Are you hoping that the cable channel continues to air it for years to come?

Thank all that’s unholy TBS didn’t cancel American Dad, like they did everything else on their channel, apparently.

Good thing about animated shows is you can run for 666 seasons without any characters aging. It’s the closest thing to immortality on your side of Earth’s crust.