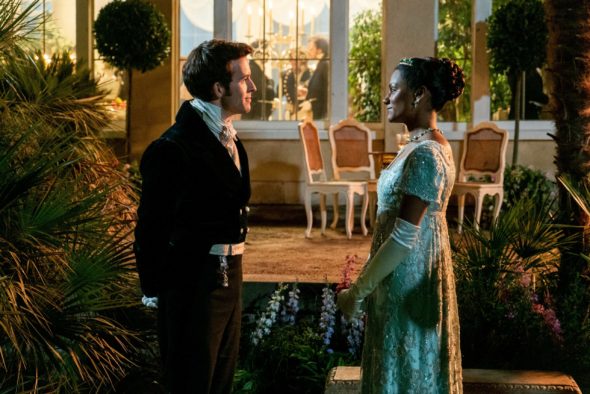 Bridgerton is returning for its second season next month, and viewers are being given a peek at what’s to come in the Shondaland romantic drama. Starring Phoebe Dynevor, Golda Rosheuvel, Jonathan Bailey, Luke Newton, Claudia Jessie, Nicola Coughlan, Ruby Barker, Sabrina Bartlett, Ruth Gemmell, Adjoa Andoh, Polly Walker, Ben Miller, Bessie Carter, and Harriet Cains, the historical drama is based on the novels of Julia Quinn. Season two focuses on the romance of Lord Anthony (Bailey).

Netflix revealed the following about the return of the series in a press release.

“From Shondaland and Creator Chris Van Dusen, the second season of Bridgerton follows Lord Anthony Bridgerton (Jonathan Bailey), the eldest Bridgerton sibling and Viscount, as he sets out to find a suitable wife. Driven by his duty to uphold the family name, Anthony’s search for a debutante who meets his impossible standards seems ill-fated until Kate (Simone Ashley) and her younger sister Edwina (Charithra Chandran) Sharma arrive from India. When Anthony begins to court Edwina, Kate discovers the true nature of his intentions – a true love match is not high on his priority list – and decides to do everything in her power to stop the union. But in doing so, Kate and Anthony’s verbal sparring matches only bring them closer together, complicating matters on both sides. Across Grosvenor Square, the Featheringtons must welcome the newest heir to their estate while Penelope (Nicola Coughlan) continues to navigate the ton whilst keeping her deepest secret from the people closest to her.

Check out the preview for Bridgerton season two below. The new episodes will be released on March 25th.

What do you think? Are you excited about the second season premiere of Bridgerton on Netflix?

I will not be watching this season. I am familiar with Julia Quinn & I don’t think making her books into ethnic studies romances is very good.

I love the show, but the ethnic diversity was NOT historically correct and I gave them a pass knowing Shonda could never have made a show without a heavy black presence. I looked past the color and enjoyed the romance and story which were great and the actors, all of them, were fantastic. However, Carolyn, thank you for bringing up the “elephant in the room.” I am far from progressive in my politics, but Shonda thinks in terms of color, not humanity. Good thing so many horrible white people are also able to look past this stretch of truth in… Read more »