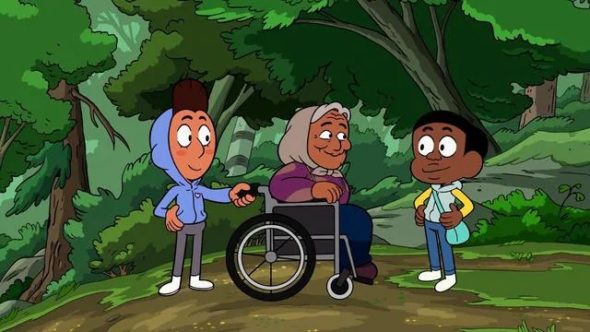 Craig of the Creek is returning with five special new episodes this week on Cartoon Network. The episodes will focus on inclusion. Featuring the voices of Philip Solomon, Georgie Kidder, Noël Wells, and H. Michael Croner, the animated series follows young Craig and his two best friends as they have adventures at their neighborhood creek.

Cartoon Network revealed more about the special episodes in a press release.

“Craig and his friends are back for more summer adventures at the Creek! A week of new episodes kicks-off Monday, July 11 (6:00 p.m. ET/PT) on Cartoon Network with the premiere of “The Champion’s Hike.” In another first for representation for the acclaimed series, Deaf character Jackie returns in this episode, this time with a closer look at his family. Each episode throughout the week will be available on HBO Max the next day.

In “The Champion’s Hike,” the kids meet up at Jackie’s before heading out to a hidden waterfall deep in the creek. This special episode features Jackie and his dad signing in Black American Sign Language (BASL), one of ASL’s dialects, and primarily only used within the Black Deaf community. BASL has different linguistic variations from ASL, such as signing space, number of hands used, facial expressions, and different lexicons. The kids also use ASL with Jackie throughout “The Champion’s Hike.” Southern California Black Deaf Advocates consulted on the episode.

Plus, be sure to tune-in for additional premieres every night as Craig and friends create the ultimate board game; an unlikely friendship is developed, and a few lessons learned, when Craig has Jason the Forest Scout over to his house; Craig finds himself competing in a staring contest; and master sleuth, JP, is on the case as alter-ego/superhero Silver Fist, to find out who’s been stealing the Creek kids’ most prized possessions, while the Secret Keeper finds the courage to reveal their true feelings for a friend.

Craig of the Creek premiere lineup for the week of July 11 on Cartoon Network is below (each episode available next day on HBO Max):

Monday, July 11 – “The Champion’s Hike” – Craig joins his former enemies, the Champions of the Other Side of the Creek, when they meet up at Jackie’s house before heading out to find a secret waterfall.

Tuesday, July 12 – “Bored Games” – Bored on a rainy day, Craig, Kelsey and JP put together their broken board games and find themselves transported into the ultimate gaming challenge.

Wednesday, July 13 – “Scoutguest” – Craig finds himself with an unlikely house guest when Jason the Junior Forest Scout sleeps over.

Thursday, July 14 – “My Stare Lady” – Craig enters a dangerous staring contest, hoping to win another one of Kenneth’s Cubes.

Friday, July 15 – “Silver Fist Returns” – There’s a thief in the Creek, and there is only one hero who can stop them: SILVER FIST! Plus, the Secret Keeper finds the courage to finally reveal their true feelings for a friend.”

Check out a preview for the return of Craig of the Creek below.

What do you think? Are you excited about the return of this Cartoon Network animated series?