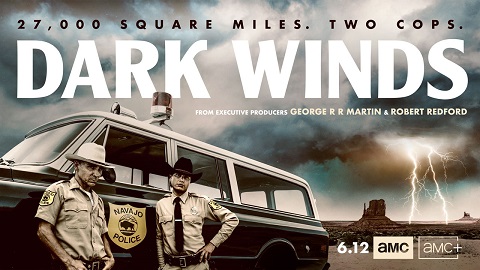 Dark Winds is coming to AMC. The cable channel has released a trailer and announced the premiere date for the new noir thriller series which is based on the Leaphorn & Chee book series by Tony Hillerman. Starring Graham Roland, Zahn McClarnon, Kiowa Gordon and Jessica Matten, Noah Emmerich, Deanna Allison, and features Rainn Wilson, the series arrives in June.

“AMC and AMC+ today released the trailer and key art of its upcoming original series, Dark Winds. The noir thriller, based on the iconic Leaphorn & Chee book series by Tony Hillerman, premieres Sunday, June 12 on AMC and AMC+ with two episodes. One new episode will debut every Sunday on AMC, and AMC+ subscribers will have advance access to an additional episode each week, beginning June 19.

Set in 1971 on a remote outpost of the Navajo Nation near Monument Valley, Dark Winds follows Lieutenant Joe Leaphorn (Zahn McClarnon, The Son, Westworld, Fargo) of the Tribal Police as he is besieged by a series of seemingly unrelated crimes. The closer he digs to the truth, the more he exposes the wounds of his past. He is joined on this journey by his new deputy, Jim Chee (Kiowa Gordon, The Red Road, Roswell, New Mexico). Chee, too, has old scores to settle from his youth on the reservation. Together, the two men battle the forces of evil, each other and their own personal demons on the path to salvation.

Check out the trailer for Dark Winds below.

What do you think? Are you planning to check out the Dark Winds TV series on AMC?