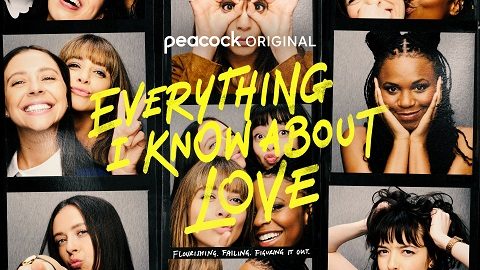 Everything I Know About Love is coming to Peacock this month and the streaming service has released a trailer teasing the relationship drama. Starring Emma Appleton, Bel Powley, Marli Siu, Aliyah Odoffin, Connor Finch, Jordan Peters, and Ryan Bown, the show is based on the novel by Dolly Alderton. The story follows four female friends who experience love and heartbreak in their 20s.

“The central love story of Everything I Know About Love is between childhood best friends Maggie and Birdy. But it is also a raucous girl gang show, set in a 2012 London house-share inhabited by four girls – Maggie, Birdy and their mates from university, Amara and Nell. The series is an unflinching deep dive into bad dates, heartaches and humiliations and begs the question: can platonic love survive romantic love as we grow up?

· Logline: Four friends. One story of great love. A messy, raucous stumble into bad dates and heartaches – and surviving your twenties. The bestseller from the heart of Dolly Alderton.

· Produced by: Working Title Television, which is part of Universal International Studios, a division of Universal Studio Group. The series will be distributed by NBCUniversal Global Distribution.”

Check out the trailer for Everything I Know About Love below.

What do you think? Are you planning to check out this new series on Peacock later this month?