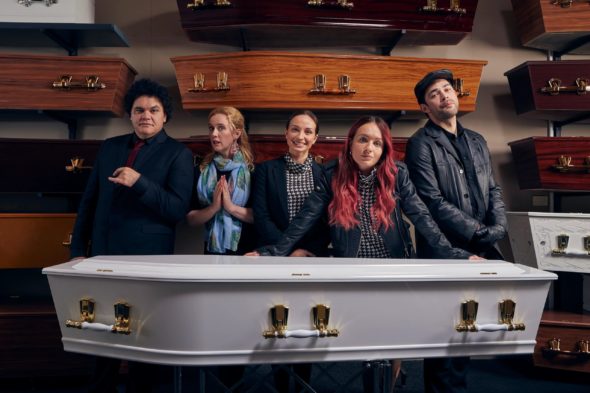 Good Grief is coming back to Sundance Now later this week, and a trailer has been released teasing the second season of the New Zealand comedy. Eve and Grace Palmer star in the series which follows a pair of sisters who have their lives changed when they inherit Loving Tributes, their grandfather’s funeral home.

Sundance Now revealed more about the return of the series in a press release.

Co-created, co-written and starring sisters Eve and Grace Palmer along with co-creator/co-writer Nick Schaedel, the six-episode comedy series is set in small New Zealand town and follows two millennial sisters with very different personalities who inherit a funeral home from their grandfather.

Since inheriting the Loving Tributes funeral home in Season 1, Ellie (Eve Palmer) and Gwen Goode (Grace Palmer, Adrift) have set off on very different paths. Ellie embraces her inner ‘girlboss’, with all the ill-fitting pantsuits, amateur TV ads, and plumber liaisons that entails. Meanwhile, Gwen spends five months DJing in Bali and reappears unexpectedly in New Zealand to discover their mother has a new boyfriend and she’s been kicked out of the family home. Gwen moves in with Ellie, takes up the job of social marketing for Loving Tributes, and embarks on a childish prank war against their mother’s new partner. As family tensions escalate at work and at home, Ellie must decide whether to intervene, or let Gwen grow up all by herself.

Good Grief, Season 2 is directed by Kiel McNaughton (The Legend of Baron To’a, My Life is Murder), produced by Angela Cudd (I Am Waru) and Kerry Warkia (Vai, Waru).”

Check out the trailer for Good Grief season two below.

What do you think? Are you excited about the return of Good Grief on Sundance Now and IFC?