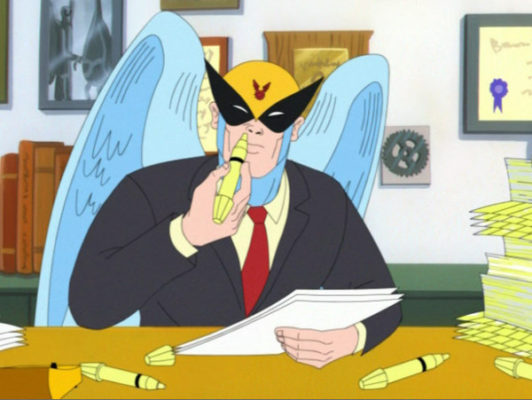 “Get me out of this before I do something crazy.” Adult Swim has just released a new clip from their upcoming TV special Harvey Birdman, Attorney General.

The original animated series centered on Harvey Birdman, a former superhero who now works as an attorney for other cartoon characters from the 1960s and ’70s. The show ran for four seasons between 2000 and 2007.

The new special features the original cast of voice actors reprising their roles from the beloved animated series Harvey Birdman, Attorney at Law. Representing Harvey Birdman will be Gary Cole. The spokesperson (literally) for Phil Ken Sebben is Stephen Colbert. Mentok the Mindtaker is represented by John Michael Higgins. Paget Brewster is spokesperson for Birdgirl and Peter Potamus by Chris Edgerly, while X the Eliminator and Black Vulcan will be represented by Peter MacNicol and Phil LaMarr, respectively.

In conjunction with the special’s premiere, the past three seasons of Harvey Birdman, Attorney at Law is now available to own on iTunes, Google, Amazon, PlayStation and Xbox. Fans can also catch previous episodes at adultswim.com.”

What do you think? Are you a Harvey Birdman fan? Will you watch the new special?