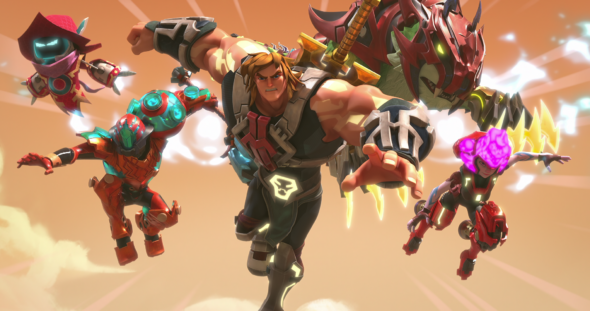 “On Eternia, the first planet of creation, a demonic tyrant rises: Skeletor! With dark armies at his command, Skeletor is on the march, hell-bent on capturing Eternia’s kingdoms, and its ultimate prize – Castle Grayskull, the ancient fortress of mystery said to contain the greatest power in the universe.

It’s up to He-Man and his brave squad of rookie heroes to stop Skeletor and restore the peace. Both sides come armed with enchanted Power Weapons – transforming them into Masters of the Primal Powers of the Universe. It’s Master vs. Dark Master, He-Man vs. Skeletor – fighting for control of Eternia, Castle Grayskull, and the fate of us all. In the end, who will become MASTER OF THE UNIVERSE?”

Check out the preview for He-Man and the Masters of the Universe below. The series premieres on September 16th.

What do you think? Are you planning to watch this new animated series on Netflix next month?

He man is my favorite movie and cartoon I can’t wait!!!!

I am so excited for this new Kids version because will introduce kids to the most Powerful series in the Multiverse!

Looks absolutely horrible, with no resemblance at all to the original. This is the equivalent of somebody putting a bunch of autotuned 14 year olds in a singing group and calling it “The Beatles”. All of these people trying to cash in on Masters of the Universe (and yes, Kevin Smith, that includes you – though his take on it was better than this dragonshit) miss the ONE single most important element of the original series. And that is the fact that Skeletor was the true star of the show. His voice & his sarcastic humor MADE that show a… Read more »

A fresh approach to He-man for kids today. Looks more fun than the Kevin Smith attempt which took itself too serious.

For this generation of kids. Which is fine. Not for adults who were children of the 80’s and watched He-Man!

Definitely missing any sort of feeling the original had. And people were hand wringing over kevin smith’s version? Geesh.

I’ll pass on this series as well. Bring back the 2000 series of He Man.