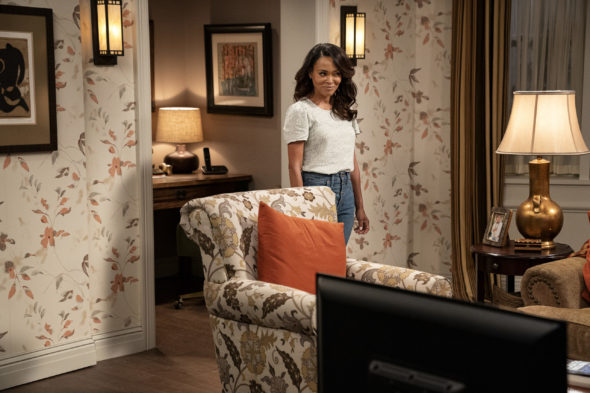 The Head of the Class revival will premiere on HBO Max next month, and the first preview has now been released. In the footage, Robin Givens reprises her role as Darlene Merriman from the original series which ran for five seasons on ABC.

HBO Max revealed more about Givens’ appearance in the series.

“HBO Max shared a first look of Robin Givens as an all-grown-up Darlene Merriman in the upcoming Max Original series HEAD OF THE CLASS, inspired by the 1980s sitcom of the same name.

Character Description: A member of the original Individualized Honors Program (IHP), Darlene Hayward is an ambitious lawyer with a degree from Stanford. She wants what is best for her son and is hyper focused on setting him up for success. Darlene might need a reminder of the positive impact an out-of-the-box teacher can have, but she’s fighting for the good of all students at Meadows Creek High as co-head of the Parents’ Association.

Logline: HEAD OF THE CLASS revolves around a group of overachieving high school students who meet their greatest challenge – a teacher, Alicia Gomez (Isabella Gomez – One Day at a Time), who wants them to focus less on grades and more on experiencing life.”

Check out the preview for the Head of the Class revival below.

What do you think? Are you planning to check out the Head of the Class revival on HBO Max? Were you a fan of the original series on ABC?

Wow! Robin looks Fantastic! I see she’s stayed consistent with the “Darlene” character of the past which is great. However, the “box” laugh track is a bit irritating.