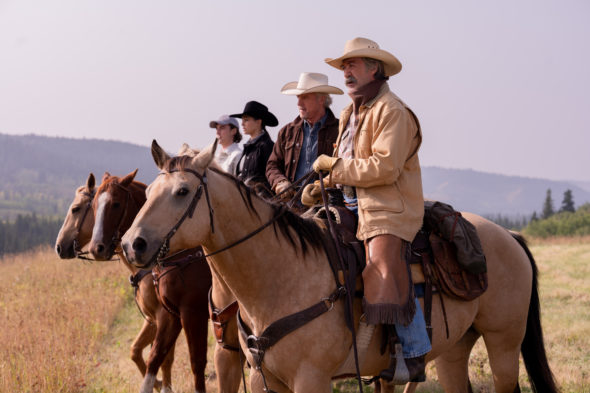 Saddle up! The long-running Canadian Heartland TV series is returning to the United States. UP Faith and Family has announced that season 14 will debut on the streaming service on Thursday, May 6th. The rest of the 10-episode season will be released each Thursday after that.

The Heartland series originates on CBC in Canada and the 14th season of 10 episodes aired from January until March on the channel. UP Faith and Family is the first outlet to air season 14 in the United States and also offers the preceding 13 seasons.

At some point, it’s expected that the UPtv cable channel will air the 14th season as well. Last year, season 13 started streaming on UP Faith and Family in February 2020 and it premiered on UPtv in June 2020.  In the States, Netflix also streams the Heartland series but typically releases the newest season much later.  Seasons 12 and 13 just came to Netflix in February 2021.

Here’s the 14th season trailer, from when it debuted in Canada:

CBC has not yet renewed Heartland for a 15th season.

What do you think? Do you enjoy the Heartland TV series? Will you be watching season 14 on the UP Faith and Family service or, will you wait for it to be released elsewhere?

Love heartland! its definitely a show that needs to keep going on and on! I love it

We love Heartland!! Wish it was on every week all year every year! Wish there were more horse series. And horse related movies too!

I love This show I crave this show the feeling I get after every episode makes me feel like I’m part of their family. Please keep airing this show I’m stuck been waiting for season 14 and more

I am an American. I have watched all 13 Seasons. I was glued to my TV every day until I finished all 13 seasons. I’m so in love with this show. I’m currently watching season 14. I sincerely hope there will be a season 15.

Why can’t we see Heartland on Netflix anymore ? I’ve only seen up to the last one that they aired season 11. I’m missing the others. My favorite show.

This is my absolute favorite loved program. I was hoping that they would do a season 15. I really love everything about it. I really love the horses & what Amy can do with them. Thank you for letting us it your lives.

I watched Heartland from beginning to end. I absolutely love it. I was raised on a cattle and wheat farm. So I can relate to some of their family issues. I’ve never stayed glued to a show like Heartland. I am very happy to know season 14 is coming. I will be patiently waiting.

I live in the US,& I Love, Love, Love Heartland, can’t wait for season 14, Thank you for such a Great program

We carnt wait to watch the next series of heartland .we have been glued to the series on Netflix. I know there’s going to be some sad events coming up With Ty wish he didn’t have to leave the show.

YES we love it

Funny but I am an American and my favorite show is Heartland. Please renew the series and keep it coming to me!

Watched Heartland season1-13 for a month on Netflix best family entertainment I’ve seen. When will season 14 be coming to Netflix. I live in the UK,p.s.Amy and ty belong together

I love it can’t wait to see season 15