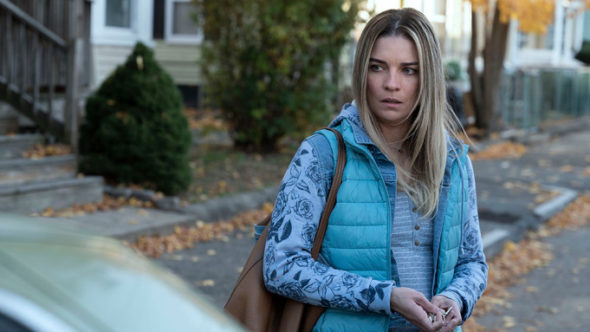 Kevin Can F**k Himself now has its premiere date. The series, which stars Annie Murphy (Schitt’s Creek), will arrive on AMC in June. Episodes will be released weekly on the AMC+ streaming service before they air on cable. There are eight episodes in the first season.

The new comedy follows a woman (Murphy) who is the typical sitcom wife, but things change as she tries to break away from that life. Mary Hollis Inboden, Eric Petersen, Alex Bonifer, Brian Howe, and Raymond Lee also star.

AMC revealed more about Kevin Can F**K Himself in a press release.

Kevin Can F**k Himself follows the story of Allison McRoberts (Murphy), a woman we all grew up believing we knew: the prototypical Sitcom Wife. She’s beautiful and can take a joke (though she’s usually the butt of them). And she’s married to a guy who must’ve won some sort of marriage lottery, because she looks the way she does and he’s… funny. But what happens when we follow Allison out of her husband’s domain? When she finally wakes up to – and revolts against – the injustices in her life? Kevin Can F**K Himself breaks television convention and blends multi-camera comedy with single-camera realism to make us ask: “who and what have we been laughing at all of these years?”

What do you think? Are you planning to check out the Kevin Can F**k Himself TV series on AMC+ or AMC?

I really like the show” Kevin Can F__ k himself” I can’t wait to see what happens next!!! ??? I hope the show resumes soon!! Please continue with the show,I’m hanging off the cliff right now…????!!!!!