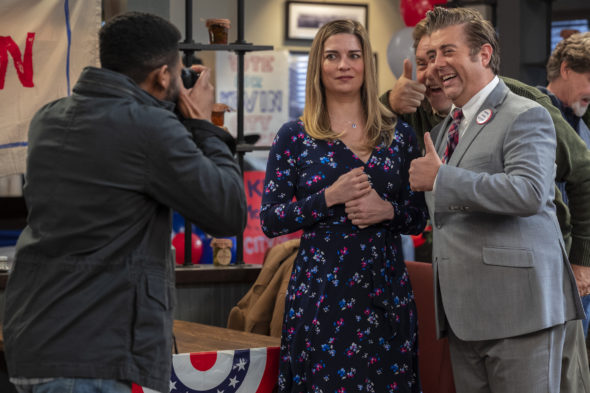 Allison’s story will come to an end this summer. AMC previously announced that Kevin Can F**k Himself will end with its upcoming second season. Now, the cable channel has announced that the final episodes will kick off with a pair of episodes on Monday, August 22nd.

A dark comedy, the Kevin Can F**K Himself TV show stars Murphy, Eric Petersen, Mary Hollis Inboden, Alex Bonifer, Raymond Lee, and Brian Howe. Set in Worcester, Mass., the series tells the story of Allison McRoberts (Murphy), a woman we all grew up believing we knew — the prototypical “sitcom wife.” She’s beautiful and can take a joke, though, to be honest, she’s usually the butt of them. And, Allison’s married to Kevin (Petersen), a husky and “lovable” man-child who must’ve won some sort of marriage lottery. But, what happens when we follow Allison out of her husband’s domain? When she finally wakes up to – and revolts against – the injustices in her life? The series breaks television convention and blends multi-camera comedy with single-camera realism to make us ask: “who and what have we been laughing at all of these years?”

In the upcoming second season of eight episodes, Allison and Patty (Inboden) must deal with Neil’s (Bonifer) discovery of their dark secret. This development pushes Allison to alter her original escape plan and to find a better way out of her marriage to Kevin. Patty agrees to help once again but this time, on her own terms.

What do you think? Are you looking forward to watching the second season of the Kevin Can F**k Himself TV series? Are you disappointed that there won’t be a third season or, is two years a good time to end this AMC show?