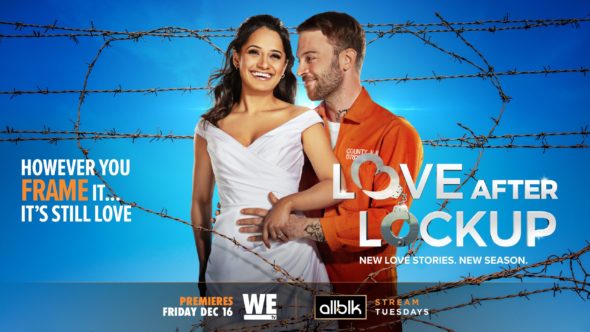 Season four of Love After Lockup will resume next month on WE tv and the cable channel has released a video teasing the 10 new 90-minute episodes. Launching in 2018, the reality series follows the relationships of recently released felons and their significant others.

In a press release, WE tv revealed more about the return of the series and the featured couples.

WE tv announced today that “Love After Lockup,” the original installment of the hit franchise, returns on Friday, December 16 at 9 PM ET/8 PM CT with 10 new must-see 90-minute episodes.

This season four new couples plus two franchise favorites who were JUST released after their stints on “Love During Lockup” take the drama to the next level with deeper love, bigger doubts, even more mystery, and unique firsts – from first touch and kiss, to moving in together, to meeting the family. As viewers go along for the wild ride of maintaining romance beyond prison walls, they will once again debate if it’s true love or just another convincing con. Although every journey begins with a long-awaited prison release, each of our lovebirds and jailbirds have their own winding path to the altar… or an explosive breakup.

Aris was a fan of Cameron’s music and slipped into his DMs. Falling head over heels for Cam, Aris boldly commented that she would like to have his babies and eager for his release to begin their life together. However, she can’t help but be nervous about his rap career and large fanbase of women, and shocked by his family thinking he should play the field. Aris has zero tolerance for bad behavior, so when Cam heads directly to the studio, where temptations run rampant, could this mean trouble?

Jeweler Ashley and convicted bank robber Travis were set up by his sister after she bought jewelry from Ashley. Ashley wasn’t interested in an inmate, but then she saw his photos– now they’ve been together for almost four years! Ashley can’t wait to show Travis her home in Florida where she’s expecting the proposal of a lifetime. Despite her excitement to see Travis for the first time in two years, she is worried about Travis’ jealousy towards her neighbor Martin, who’s made several advances. Ashley plans to employ Travis at her jewelry business, but can she trust him around her safe of valuables?

While scrolling through a Facebook pen-pal group and seeing Derek’s photo a few times, Monique couldn’t resist reaching out. When the pair first connected, Derek caught feelings and wanted to make things official. Two years later, they’re still committed, but their trust continues to be tested by outside forces, including their disapproving families. Monique and Derek have never seen each other in person, and she is concerned about how he’ll react at their first meeting, since Derek is very into fitness, and she’s lied about sharing the same passion – but credits him for her desire to undergo weight-loss surgery.

Nathan knew of Skylar through her ex, but had never spent any time with her, until their drama-filled connection while she was at a halfway house, resulting in Skylar being sent back to jail. While Skylar’s been in prison Nathan moved into his Grandmom’s house and started planning his proposal for their one-year anniversary. Will history repeat itself or is the second time the charm?

From the first season of “Love During Lockup,” Gabrielle and Chris are back. Chris won a large settlement from an injury during his sentence at Rikers, and Gabby has taken full advantage of his money – from upgrading her apartment to purchasing a luxury car, undergoing plastic surgery, and purchasing an engagement ring. Now that the money’s been spent, will Gabby still be committed to Chris? Wanting Chris all to herself, Gabby will be waiting at the gates to pick him up on release day, but so will his mom and sister – Gabby’s nemeses. Who will win: family or fiancée? Has Chris changed his ways, and will he leave his old life of crime and women behind? Meanwhile, Gabby is keeping a secret about her own bad behavior…when Chris finds out, will he call it quits?

Jumping straight from season two of “Love During Lockup,” Justine and Michael will see if their prison marriage can survive in the real world. Justine and her three kids have uprooted to Pennsylvania, into a bigger home to make room for Michael and his four kids – will they be able to coexist as a blended family and co-parent as harmoniously as they hope? On top of managing their family and home life, Michael is ready to resume his rap career, and Justine can’t help but worry about what will change when fame and bad habits sets in.

Check out the trailer for Love After Lockup season four below.

What do you think? Are you planning to watch the return of this reality series on WE tv next month?

Yes, because hey who doesn’t want to make celebrities out of criminals – where can it possibly go wrong. In the country that brings us anti abortion federal laws and religion sicking its nose into every aspect of human life, we also get this. does anyone else see the utter dichotomy that is the USA.