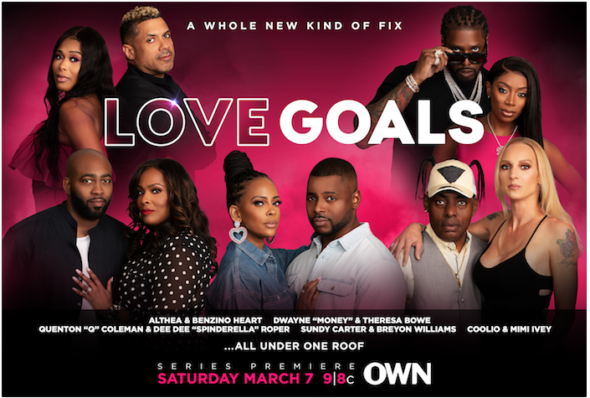 “If things do not change, I might as well be alone.” OWN just announced the premiere date for their new TV show, Love Goals.

The reality series follows couples therapist Spirit as she “counsels five celebrity couples who are at crossroads in their relationships. Their challenges range from fame and power, infidelity and communication issues, as well as overcoming childhood trauma.” The couples include Benzino and Althea Heart, Dwayne “Money” Bowe and Theresa Bowe, Sundy Carter and boyfriend Breyon Williams, Dee Dee “Spinderella” Roper and comedian Quenton “Q” Coleman, Coolio and his fiancé, Mimi Ivey.

Love Goals premieres on OWN on March 7th at 9 p.m. ET/PT.

From Irwin Entertainment, the production company behind hit series “Celebrity Rehab,” “Couples Therapy” and “Family Therapy,” comes “Love Goals,” in which renowned family and relationship therapist, Spirit, counsels five celebrity couples who are at crossroads in their relationships. Their challenges range from fame and power, infidelity and communication issues, as well as overcoming childhood trauma. Through an intense two-week therapy program that features both insight-oriented exercises and special guests, these  famous couples will face their most challenging conflicts head on, as they strive to achieve their love goals.

Appearing in the freshman season of “Love Goals” will be:  Benzino and Althea Heart, whose tumultuous and litigious relationship is well known to fans from their featured roles in “Love & Hip Hop: Atlanta;” Former NFL wide receiver and rapper Dwayne “Money” Bowe and Theresa Bowe, who have been together for 11 years and wed in 2018;  Actress and former “Basketball Wives” star Sundy Carter and boyfriend Breyon Williams; Former Salt-n-Peppa group member Dee Dee “Spinderella” Roper and comedian Quenton “Q” Coleman; Plus rapper/actor/chef and producer Coolio and his fiancé, Mimi Ivey.

Series’ host, Spirit, is a licensed therapist and media personality who aims to empower people with the skills, tools, and information vital to developing, sustaining and maximizing healthy, intimate relationships. Spirit was the host of Fox’s, “The Daily Helpline,” and XM/Sirius’ nightly radio program “Talking with Spirit.” Spirit is also a regular guest of HLN, “Dr. Drew: On Call,” “The Bill Cunningham Show,” and “The Rickey Smiley Morning Show.”

What do you think? Do you watch OWN? Will you check out Love Goals?

I’m excited to see the interactions of the couples during therapy session longer than what these shows usually feature . We’ve been married 43 years. We have had couples therapy, too. It is a blessing to be able to spend so much time with someone you love and who loves you back. To have our faith in God AND be equipped with the tools from counseling that one needs to change and grow, grow and change like all relationships do, is wonderful. I hope all of the participants enjoy success on the other side of this experience. Love is the… Read more »