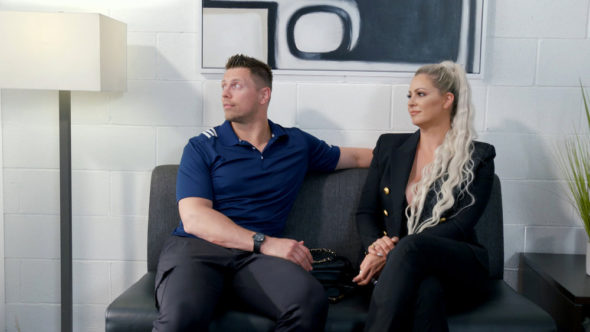 Miz & Mrs. is returning soon with its third season. USA Network has set a June 6th return date and released a teaser trailer. The series follows the lives of The Miz and his wife Maryse from the WWE as they raise two young children.

USA Network revealed more about the return of the series in a press release.

“Miz and Mrs” gives an exclusive glimpse into the life of WWE Superstars The Miz(R) and Maryse.(TM) This season the “it couple” is faced with their biggest challenge yet, raising two toddlers. With big career moves on the horizon and a revolving door of family members, the Mizanins must learn how to balance the pressure of their careers with family life.

In the Mizanin household every day is a crazy new adventure. From “Dancing with the Stars” to Maryse’s unimaginable return to the WWE ring, this power couple sets out to prove that as long as they have each other they can accomplish anything. In the season premiere, Mike gets presented with an unexpected opportunity to do “Dancing with the Stars” and struggles to decide whether he should stand up to the challenge or stay in his comfort zone while Maryse deals with the aftermath of ousting her mother, Marjo, from their house.

Check out the trailer for Miz & Mrs. season below.

What do you think? Are you excited about the return of this reality series to USA Network?