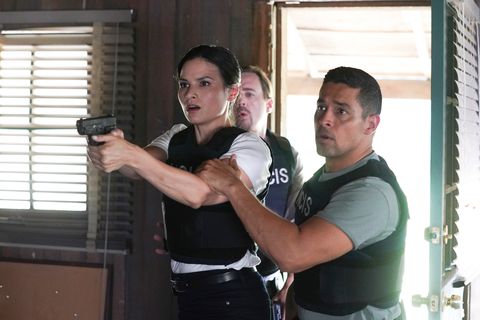 NCIS viewers will see a big crossover on CBS in March. Cast members Wilmer Valderrama and Katrina Law are heading to the islands for an episode of NCIS: Hawai’i.

Both CBS and Valderrama teased the crossover on social media on Monday ahead of the return of the shows from winter break. Valderrama said, “Listen… I am headed off to Hawaii to shoot a crossover event.”

Law added, “I’ve also got something to tell you… I’m coming to Hawaii, too.” She notes, “It’s going to be good, being back on the islands, solving crimes.” Law previously starred as Sergeant Quinn Liu in season 10 of CBS’ reboot of Hawaii Five-0.

No details about the plot of the episode were revealed. The crossover episodes will air on March 28th.

What do you think? Are you excited about seeing NCIS and NCIS: Hawai’i working together in March?

Definitely piques my interest. Been feeling a little bored lately.