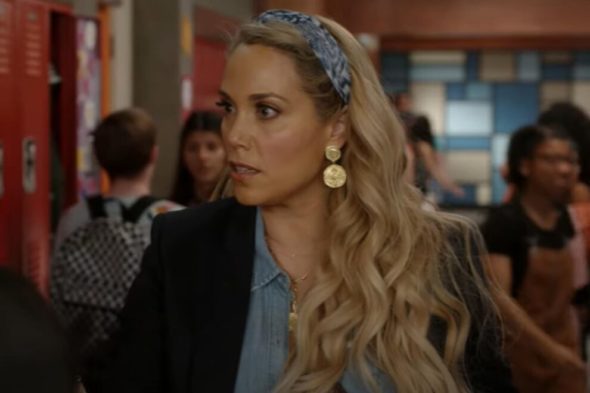 Saved by the Bell is coming soon to Peacock, and a new trailer has been released for the revival of the popular Saturday morning sitcom. The trailer includes a moment that pays homage to the original series. Elizabeth Berkeley Lauren and Mario Lopez have both returned to Bayside High, but they are playing very different roles. No longer students themselves, they’re helping the next generation of teens as make their way through classes.

The trailer has a scene where Berkeley Lauren’s character grabs a bottle of caffeine pills from Zack Morris’ son. Per Deadline, Berkeley Lauren said the following about revisiting iconic “I’m so excited” scene for the Peacock series:

“There is a really great episode that pays homage to that moment where Jessie still has some interesting feelings about that time. Of course, one of the most loved episodes is the ‘I’m so excited’ caffeine pill episode — and to this day, people still come up to me and say those three words.”

Though the series revival will have touches of nostalgia, executive producer Tracey Wigfield notes this “reimagined” version is intended to be accessible for new viewers. She said, “While the original show was a Saturday morning show about high school, this is a single-camera, edgier comedy that will be exciting for people who loved the original but if you never saw the original it’s just a funny comedy about high school in 2020.”

Check out the new trailer for the Saved by the Bell revival below. A premiere date has yet to be announced.

What do you think? Are you excited for the revival to arrive on Peacock? Did you watch the original Saved by the Bell?

I still remember the original Saved By The Bell. I hope that reboot will become another winner on its hand.

Really look forward to seeing the revival of saved by the Bell , saw the preview looks good.