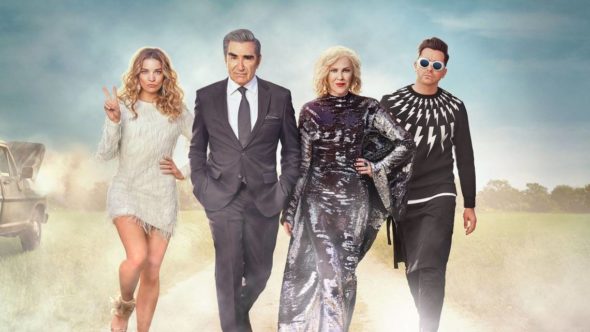 It is almost time to say good-bye to Schitt’s Creek, and Pop TV is planning a big send off for the series. A special has been planned for airing after the series finale, and it will take fans behind the scenes. The cast of this comedy includes Eugene Levy, Catherine O’Hara, Daniel Levy, Annie Murphy, Chris Elliott, Jennifer Robertson, Emily Hampshire, Dustin Milligan, Tim Rozon, and Sarah Levy.

Pop revealed more about this special in a press release. Check that out below.

“After six celebrated seasons and enough awards and nominations to make Moira Rose swoon, Pop TV is celebrating its breakout hit SCHITT’S CREEK with the ultimate farewell for fans: an intimate behind-the-scenes look at the beloved series with the special Best Wishes, Warmest Regards: A Schitt’s Creek Farewell. The inside look will debut on Pop TV on April 7 at 8:30PM ET/PT immediately following the series finale, which is being supersized in a simulcast across Pop TV, Comedy Central and Logo in a special event at a new time, 8PM ET/PT.

“As we celebrate the end of SCHITT’S CREEK, we couldn’t do it without creating a special TV moment to send this historic series out on top,” said Brad Schwartz, President, Pop TV. “This must-watch behind the scenes doc is the perfect way to honor a series that has made an impact in so many people’s lives, with enduring characters and stories filled with heart, humor and honesty that will stand the test of time.”

BEST WISHES, WARMEST REGARDS: A SCHITT’S CREEK FAREWELL, directed by Amy Segal, is a celebration of the four-time Emmy(R)-nominated comedy series and its undeniable cultural impact. Fans will go behind the scenes for the first time, with never-before-seen footage of wardrobe fittings, the emotional final table read, audition tapes, and more. The special will feature interviews with the cast, creators, journalists, and celebrity superfans including Paula Abdul, Will Arnett, Carol Burnett, Cameron Crowe, Tony Hale, Amy Sedaris, Johnny Weir, and more.”

Check out a video promoting the special for the end of the series below.

What do you think? Are you sad to see this series end? Will you watch the special following the series finale?

By far one of the best comedy classics of all time. Sad to see this show end, but am sure this will continue to have a growing fan base. I for one will definitely buy the whole series and enjoy it for many years into the future.

Very sad to see the show end. Big fan of Eugene Levy and Catherine O ‘Hara back to SCTV. They are great, as the rest of the cast. Thanks for the laughter.

Greetings: My family and I are so distraught knowing SCHITT’S CREEK is coming to an end! Such a great show and so underrated. We’ve done COUNTDOWNS waiting for each new episode from DAY 1. We’ve watched on Amazon, Netflix, Pop and the Internet. Who knows? Maybe a movie one of these days (years)?