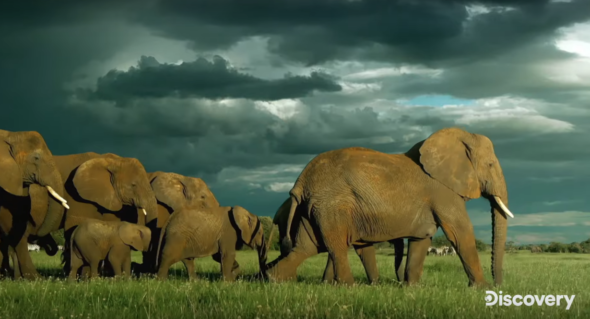 Discovery is getting wild. The network just released the premiere date and a new teaser for their upcoming TV show, Serengeti.

Narrated by Lupita Nyong’o, docuseries “follows the heartwarming stories of a cast of African wildlife including lions, zebras, baboons and cheetahs over the course of a year, showcasing the dramatic moments that make each day of survival on the Serengeti a feat.”

Discovery Channel travels to the vast, nearly untouched plains of Tanzania in SERENGETI, a new innovative six-part series highlighting the majestic animals and their day-to-day lives living together. Created and produced by Emmy(R)-winner Simon Fuller (“American Idol,” “So You Think You Can Dance”) and directed and produced by Emmy(R)-winning wildlife filmmaker John Downer (“Penguin: Spy in The Huddle”), the six-part series gives unrivaled access to one of the most pristine and unspoiled corners of the Africa. Featuring a lush original score and narrated by Academy Award(R)-winning actress Lupita Nyong’o, the groundbreaking series follows the heartwarming stories of a cast of African wildlife including lions, zebras, baboons and cheetahs over the course of a year, showcasing the dramatic moments that make each day of survival on the Serengeti a feat.

Soon the season of plenty will begin to fade and food will be harder to come by, putting the animals of the Serengeti to the ultimate test. With new arrivals and unexpected problems, old foes resurfacing and dangerous encounters at nearly every turn, the Serengeti will demand courage from all who call it home. In SERENGETI, the world’s most captivating animals try to survive in the beautiful, demanding lands of Northern Africa, stopping at nothing to protect their offspring and prove their worthiness to their tribe.

From Kali the lioness and Shani the Zebra, to Zalika the Hyena and many more, each species has their own unique story, whether dealing with their enemies or desperately searching for prey. Kali makes a big mistake and is now left completely alone to fend for herself and her cubs- an almost impossible task in the African plains. The series also features Tembo, a young male elephant struggling to take the next step on his journey into adulthood, as well as Nalla, the family matriarch juggling to lead the herd and be a mother. Across the Serengeti, Bakari the Baboon looks to honor the memory of his lost love by fiercely protecting her orphaned child. SERENGETI gives viewers a front row seat to witness how the animal experience isn’t so different from our own.

Collaborating for the first time, Fuller and Downer worked together on SERENGETI for several years. Using a photographic and highly stylistic approach, their team employed innovative filming techniques in some of Africa’s most treasured regions, painting the ultimate portrait of survival in SERENGETI. Set to the backdrop of original music by Will Gregory with vocals by artists such as Lola Lennox, this television experience combines Africa’s unimaginable beauty with its equally unforgiving brutality, highlighting daily challenges of life on the Serengeti.

SERENGETI is made by XIX Entertainment and John Downer Productions and was commissioned for BBC TV by Tom McDonald, Head of Commissioning, Natural History and Specialist Factual.”

What do you think? Are you a fan of nature documentaries? Will you watch Serengeti?

This was the most awesome series. Even my 14 year d couldn’t wait to watch it & cried when it was over. Please do a season 2 following up on the same animals. We have fallen in love with them all. Excellent work, excellent narrative, excellent everything. We were sitting on the edges of our seats!!! Loved it, loved it, loved it!!!

I love the TV show Serengeti. One of the best shows I have ever watched. Hope there is a season 2

My son and I absolutely love watching Serengeti!!! This show actually got my son to stay off his electronics and watch for the whole hour. Please tell me there will be more seasons to come???

We absolutely loved Serengeti!! Please tell me it’s coming back for a season 2!

I sure hope so

Serengeti is absolutely my favorite show. My family and I have learned so much from each episode. Please have a season 2.

Mesmerizing. I cannot wait until another series. Beautiful.

I loved Serengheti. Please bring it back for season 2.

Love the take on animal families

absolutely love the Serengeti series. It is so well done and I love the stories of the different animal groups and the beautiful narration by Lyopte Nyogone . Such survival stories are so interesting and touching. Love this nature series!

The series is very well done. However, there are no wild dogs left in the Serengeti, at least not as depicted in this series. So where did they film this pack of dogs ? I have been to the Serengeti on several occasions, and never seen dogs. Never met anyone who has seen them either.

Yes I will watch I love it

Nope. And sick of commercials every 15 seconds.