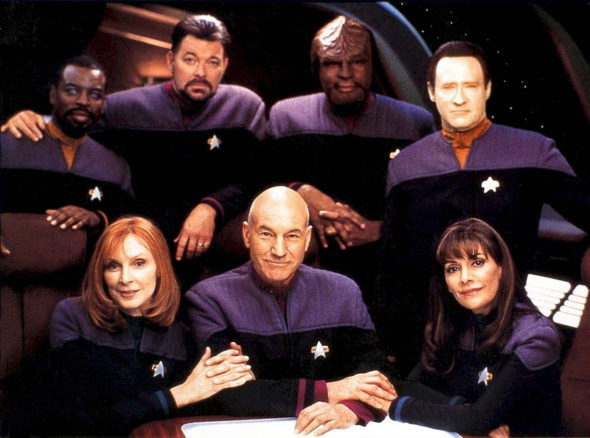 It’s the reunion that a lot of Star Trek fans have been waiting for. Today, Paramount+ announced that the core cast of Star Trek: The Next Generation — LeVar Burton, Michael Dorn, Jonathan Frakes, Gates McFadden, Marina Sirtis, and Brent Spiner — will be joining Patrick Stewart for the third and final season of Star Trek: Picard.

Here’s the cast announcement from Paramount+, as well as a teaser video:

“I remember watching the premiere of ‘Star Trek: The Next Generation’ almost 34 years ago with my father like it was yesterday. It was the spark that ignited my love for science fiction,” said Terry Matalas, season three showrunner and executive producer. “So, it’s most fitting that the story of Jean-Luc Picard ends honoring the beginning, with his dearest and most loyal friends from the U.S.S. Enterprise. It would be an understatement to say that giving these characters a proper send-off is an honor. The entire STAR TREK: PICARD team and I can’t wait for fans to experience this final, high-stakes, starship-bound adventure in season three!”

As depicted in the film “Star Trek: First Contact,” starring the aforementioned “Star Trek: The Next Generation” cast members, April 5, 2063, is the day that humans first make contact with Vulcans, marking a pivotal moment of exploration and acceptance in “Star Trek” history. Since the film’s debut, “Star Trek” fans around the world celebrate First Contact Day annually on April 5.

Season two of STAR TREK: PICARD is currently streaming on Paramount+ in the U.S., with new episodes dropping weekly on Thursdays.

STAR TREK: PICARD streams exclusively on Paramount+ in the U.S. and is distributed concurrently by Paramount Global Content Distribution on Amazon Prime Video in more than 200 countries and territories. In Canada, it airs on Bell Media’s CTV Sci-Fi Channel and streams on Crave.

As another part of this year’s First Contact Day celebrations, Paramount+ and CBS will jointly donate $1 for every Tweet (one per handle) sent that uses the hashtag #StarTrekUnitedGives through Sunday, April 10th. Donations will go towards charities that support LGBTQ+ equality, veterans, and humanitarian aid. Visit StarTrek.com/StarTrekUnitedGives for more info and terms.

About Paramount+:
Paramount+, a direct-to-consumer digital subscription video on-demand and live streaming service, combines live sports, breaking news and a mountain of entertainment. The premium streaming service features an expansive library of original series, hit shows and popular movies across every genre from world-renowned brands and production studios, including BET, CBS, Comedy Central, MTV, Nickelodeon, Paramount Pictures and the Smithsonian Channel. The service is also the streaming home to unmatched sports programming, including every CBS Sports event, from golf to football to basketball and more, plus exclusive streaming rights for major sports properties, including some of the world’s biggest and most popular soccer leagues. Paramount+ also enables subscribers to stream local CBS stations live across the U.S. in addition to the ability to stream CBSN for 24/7 news, CBS Sports HQ for sports news and analysis, and ET Live for entertainment coverage. For more information about Paramount+, please visit www.paramountplus.com and follow @ParamountPlus on social platforms.

Looking forward to it either way.