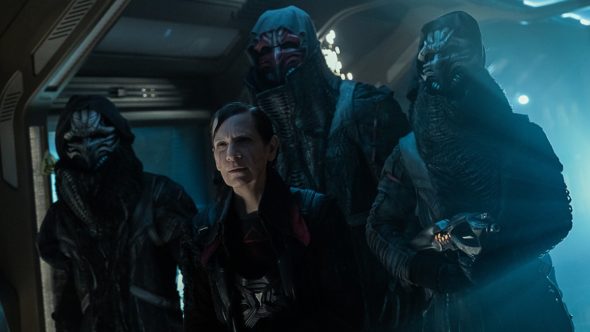 Star Trek: Picard is returning for a third and final season on Parmount+ in February, and the streaming service has released a trailer and photo featuring new arrival Amanda Plummer. The veteran actress will play a new villain out for revenge that Picard (Patrick Stewart) will face alongside his crew from Star Trek: The Next Generation. LeVar Burton, Michael Dorn, Jonathan Frakes, Gates McFadden, Marina Sirtis, Brent Spiner, Jeri Ryan, and Michelle Hurd are all set to star in season three. Mica Burton, Ashlei Sharpe Chestnut, and Daniel Davis will also appear.

Paramount+ revealed more about the upcoming season in a press release.

Paramount+ today debuted a new teaser for the third and final season of its hit original series STAR TREK: PICARD at today’s “Star Trek” universe panel at New York Comic Con. The final season premieres on Thursday, Feb. 16, 2023, exclusively on Paramount+ in the U.S., with new episodes of the 10-episode-long season available to stream weekly on Thursdays.

It was also revealed that Tony Award winner Amanda Plummer (“The Fisher King,” “Pulp Fiction”) joined the cast in a recurring role as Vadic, the mysterious alien captain of the Shrike, a warship that has set its sights on Jean-Luc Picard and his old crewmates from his days on the Enterprise. Mica Burton (“Critical Role,” “Vampire: The Masquerade: L.A. by Night”) and Ashlei Sharpe Chestnut (“Cruel Summer”) also joined in recurring roles. Ensign Sidney La Forge is played by Sharpe Chestnut and is the eldest daughter of Geordi La Forge and helmsman of the U.S.S. Titan. Ensign Alandra La Forge is played by Mica Burton, Geordi La Forge’s youngest daughter who works alongside her father.

In addition, fans learned during today’s New York Comic Con panel that Brent Spiner’s character this season is named Lore, and they will also see the return of Daniel Davis as Professor Moriarty from “Star Trek: The Next Generation.”

STAR TREK: PICARD features Patrick Stewart reprising his iconic role as Jean-Luc Picard, which he played for seven seasons on “Star Trek: The Next Generation,” and follows this iconic character into the next chapter of his life. LeVar Burton, Michael Dorn, Jonathan Frakes, Gates McFadden, Marina Sirtis, Brent Spiner, Jeri Ryan and Michelle Hurd star alongside Patrick Stewart in the third and final season of the hit Paramount+ original series.

Seasons one and two of STAR TREK: PICARD are currently streaming on Paramount+ in the U.S.

STAR TREK: PICARD streams exclusively on Paramount+ in the U.S. and is distributed concurrently by Paramount Global Content Distribution on Amazon Prime Video in more than 200 countries and territories, and in Canada it airs on Bell Media’s CTV Sci-Fi Channel and streams on Crave.”

Check out the Star Trek: Picard season three trailer below.

What do you think? Are you excited to see the third and final season of Star Trek: Picard? Do you wish there was going to be a fourth season?