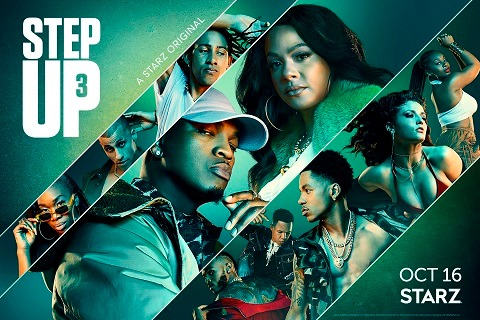 Step Up: High Water is returning for its third season on Starz, and the cable channel has released a trailer and new key art. Ne-Yo and Christina Milian star in the drama series, which takes viewers back into the world of the Step Up franchise. Faizon Love, Eric Graise, Terayle Hill, Enrique Murciano, and Tricia Helfer also star in the drama.

The show debuted in 2018 on YouTube Red and ran for two seasons on that platform before being cancelled in August 2019. Starz revived Step Up: High Water for a third season in May 2020.

Starz revealed more about the upcoming season in a press release.

In celebration of National Dance Day, today STARZ released today the trailer and key art for the highly anticipated third season of “Step Up,” set to premiere on Sunday, October 16. The hit franchise follows the non-stop drama, scandalous romance, betrayals and rivalries told through the intersection of the worlds of music and dance within a highly sought-after performance empire.

“Step Up” premieres Sunday, October 16 at midnight on the STARZ app, all STARZ streaming and on-demand platforms, and internationally on the STARZPLAY premium streaming platform across all territories. On linear, it will debut on STARZ at 10:00 PM ET/PT in the U.S. and Canada.

Welcome to High Water – a next level incubator for new artistic talent, where danger, corruption, suspicions, desires, resentments, and ambitions collide in and out of the halls of the headquarters. As the label’s talent roster grows, High Water founder and megastar Sage Odom (Ne-Yo) faces murder charges, financial ruin and powerful political enemies. His partner in business and in love, Collette Jones (Christina Milian) struggles to maintain their image as she balances a nationwide tour and stepping out of her role as the woman behind the empire all while carrying a secret that threatens to ruin it all.

Caught in the maelstrom is a collective of talented young artists that have been mentored to become top selling rappers and dance superstars: Rigo (Terrence Green), Poppy (Kendra Willis), Tal (Keiynan Lonsdale), Davis (Carlito Olivero), Odalie (Jade Chynoweth) and mysterious newcomer Angel (Rebbi Rosie), who all find that living your dream has a price.

Check out a trailer for Step Up: High Water season three below. The series returns on October 16th.

What do you think? Are you excited about the return of the Step Up: High Water series next month?