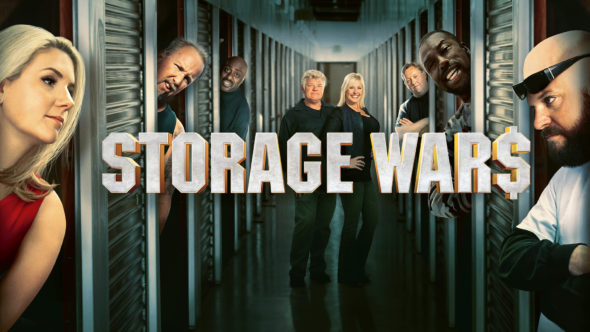 Storage Wars is returning to A&E for its 14th season next month. Before the official season premiere, viewers will see the return of original cast member Barry Weiss in two specials, which will air on October 26th.

Weiss appeared on the first four seasons of the series, and he is a lifelong antique collector. He had never purchased a storage unit before he was urged to join the series by executive producer and narrator Thom Beers.

“Iconic auctioneers Dan and Laura Dotson once again lead our buyers through unit after unit filled with all kinds of surprises… As for the buyers, Brandi Passante has focused her attention on home staging and storage lockers have a way of offering her all kinds of furniture and knick-knacks. Darrell Sheets is lured out of a cozy retirement, being simply unable to resist the pull of auctions. Ivy Calvin has added his son to the family business, bringing along Ivy Jr with him to increase his chances of success. Rene Nezhoda finds himself re-arranging his business, potentially moving his storefront to a location closer to the other buyers. And let’s not forget Kenny Crossley, who’s still trying to get the hang of buying treasure-filled units (without having to spend a fortune), all while keeping everyone in stitches. But perhaps the biggest development this season is the long-anticipated return of Barry Weiss. Adopting a strict new buying regimen and working with an internationally-recognized bidding coach, Barry is intent on getting back in the game and playing for keeps this time.

Tucked away in his storage Man Cave, Barry Weiss and Kenny sit down with Brandi and the Dotsons to relive old times, find out what they’ve been doing and gather intelligence, as he plans his return to the auction game.

Barry and Kenny host Rene and Casey to get to the bottom of the luck vs. skill debate when it comes to buying lockers. Also, Darrell stops by and reports on the status of his huge oil painting score, while teaching Barry the finer points of Sheets Strategy.

Check out a trailer for the return of Storage Wars below.

What do you think? Are you excited about the return of Storage Wars and Weiss to the series on A&E?

I would like to see new episodes of storage wars

Barry is back !!! Glad to see he is ok and the new series will be great as all the right people are there !!!!

If Dave Hester is not there, then the excitement will be missing.

Want Jerod back on the show. He’s one of our favorites.