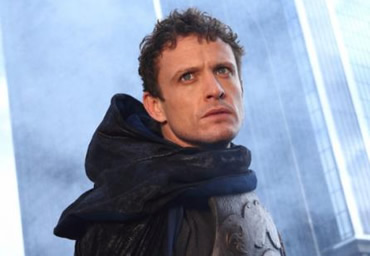 Heroes, a show about modern-day superheroes, lasted four seasons on NBC on Monday nights. Unfortunately it doesn’t look like the new hero series called The Cape will last nearly as long. It’s tanking in the ratings, had its episode order cut, and is sure to be cancelled.

What can you do? Remember, the ideal scenario for NBC is for many millions of people to watch the show on their television sets, while it’s being broadcast. Unfortunately, ratings are put together based on a sampling of viewers. If you’re a “Nielsen household,” your viewing is being counted. If not, it’s not.

However, if you like The Cape and want to see it continue, there are a few things you can do to help.

We, the undersigned, enjoy watching The Cape on the NBC network. This TV show is a great superhero action series that is unique and fun to watch.

Please find a way to keep The Cape on the air. We are devoted viewers who will continue to watch the program, encourage others to do the same, and will support the series’ advertisers as well. Please keep it going, either on NBC or, if necessary, on another NBC-related channel. If that’s not possible, please find a way to wrap up the story.

[…] Billionaire Peter Fleming (James Frain) is The Cape’s nemesis and the founder/CEO of Ark Industries. In his villainess alter-ego as Chess, Fleming is a serial killer and the man who framed Vince. He’s obsessed with chess and sees everything as a strategic game. A dangerous thug, Dominic Raoul aka Scales (Vinnie Jones) works for Fleming and is more resistant to harm because he’s covered with green and gold scales. […]