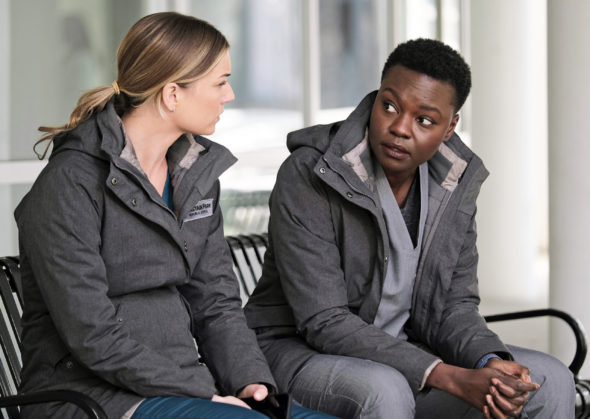 The Resident is losing another series regular prior to its fall premiere. Per Deadline, Emily VanCamp (above, left) has departed the series, and her character’s exit from the drama will be handled early in season five.

VanCamp is the second big exit the series has seen in recent months. Shaunette Renée Wilson departed the series near the end of season four.

The following was revealed about the actress’ departure from the FOX drama:

“I hear the actress asked to be released from the show at the end of last season. There was an effort to bring her back in Season 5  — something she was reportedly open to — but it did not work out. I hear there is still hope she may return as a guest star in the future.”

The actress revealed just last week that she and her husband Josh Bowman (Revenge) had welcomed their first child together.

A teaser for The Resident season five teases the fate of VanCamp’s character with cops showing up on her husband’s doorstep. Check that out below.

It needs to be September 21 already, so we can know what happens! #TheResident pic.twitter.com/wv1b5LAR6N

What do you think? Are you surprised by VanCamp’s exit from The Resident on FOX? Will you miss seeing her character in season five?

I’m so bummed these 2 characters are leaving. They brought so much to this show. For what ever reason for them wanting to leave I wish them well.

Not sure why, but this really surprised me! It’s too bad – I think she contributed a great deal to the success of the show. That being said, an amazing cast remains and I’m sure they will be able to keep us sufficiently entertained.

Sad to see her go. I thought she had a baby.

Very sorry she is leaving. She and Conrad paired very well together. Great chemistry.

That is so unfortunate that both of these characters are leaving. Both really made this show great!

Am so sorry to see this. Hoping she will return at some point. She and Conrad had such great chemistry. Hope this is not the beginning of the end for this show

Well, that’s the end of this show. You can bet your soul on that.

Sorry that she is leaving. But I certainly understand ..in reality she is a new mother just as her character is on the show. And she wants to spend time with her baby. But she will certainly be missed. I can’t imagine a story line where her character will be gone–but will still be alive and able to make an occasional appearance on the show. I hope it’s a positive one!

I am surprise to hear emily van dercamp is leaving the resident. The show wont be the same without her. I will still watch the show.