The Walking Dead: World Beyond is returning for its second and final season next month, and the AMC series has announced a big addition to the cast of the series. The Walking Dead’s Pollyanna McIntosh will appear on the series as Jadis.

“We are thrilled to have the terrific Pollyanna McIntosh back as Jadis, and we’re excited for viewers to see how she collides with the characters in this part of the Universe,” said Gimple. “In our story, years have passed — we’ll get hints of what happened with that fateful helicopter ride and learn Jadis has new allies and alliances; she is a big part of connecting the CRM and Three Circles mythology that’s seen throughout all three series. We can’t wait to share it all with fans of the TWDU,” said Gimple.

“I love the character of Jadis and I love this world so getting to inhabit her again in collaboration with the talented team at The Walking Dead: World Beyond in beautiful Richmond, Virginia was a joy. I hope audiences will catch up with the first season now so they can fully enjoy this epic final season in October,” said McIntosh.

Season two of The Walking Dead: World Beyond concludes the epic story of Iris (Royale), Hope (Mansour), Elton (Cantu), and Silas (Cumpston) — four friends who journeyed across the country on a mission that transformed everything they knew about themselves and the world. As they face off against the mysterious Civic Republic Military and fight for control of their own destiny, goals will shift, bonds will form and crumble, and innocence will be both lost and found. Produced and distributed by AMC Studios, the series is executive produced by Co-Creators Gimple and Showrunner Negrete, Robert Kirkman, Gale Anne Hurd, David Alpert, and Brian Bockrath.”

Check out a trailer and poster for the final season of The Walking Dead: World Beyond below. 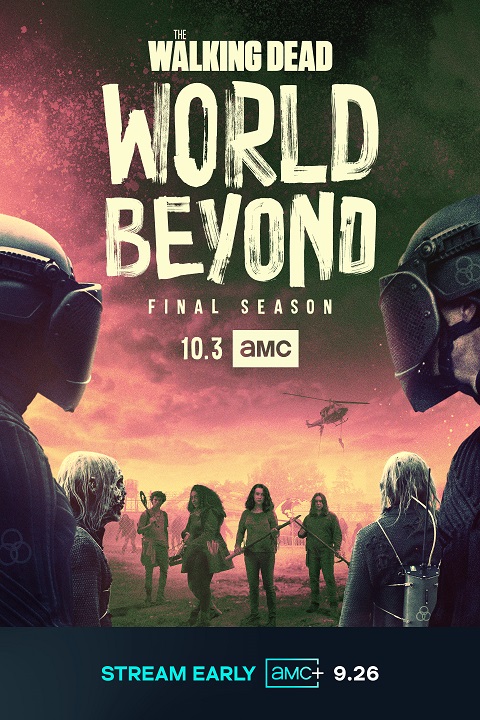 What do you think? Are you excited to see the return of this zombie series on AMC+ and/or AMC?

Absolutely love all related to TWD. Looking forward to WB..

I didn’t watch the first season, but World Beyond needs a third season. There is less and less to watch on network and cable TV every year, and I won’t pay for streaming. I would have dumped cable, but my provider decided not to raise my rates for the moment.

I cut the cord a while back and use ROKU . AMC + is inexpensive. Even with the other premier channels I subscribe to is still cheaper than cable/satellite.