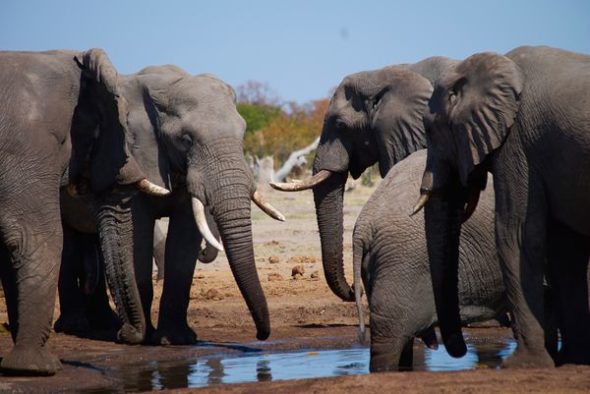 Walking with Elephants is coming to Animal Planet. The three-hour special event is set to air on Tuesday, December 15th and a preview has been released by the cable channel. In the special, explorer and conservationist Levison Wood will follow a group of elephants as they make their dangerous yearly migration across Botswana.

Animal Planet revealed more about Walking with Elephants in a press release.

“Each year, thousands of elephants make an incredible journey to the Okavango Delta in Botswana to feed on its lush vegetation, in one of the biggest natural events on the entire planet. WALKING WITH ELEPHANTS follows Levison Wood, a passionate explorer and conservationist, as he is led by these magnificent animals on their annual epic migration across Botswana; a journey fraught with risks and dangers as elephants are coming under more threats than ever before. WALKING WITH ELEPHANTS premieres as a three-hour television event Tuesday, Dec. 15 beginning at 8 PM ET/PT.

WALKING WITH ELEPHANTS gives a deeper understanding of the majestic elephants of Botswana, as Wood follows the migration route from the salt pans of the Kalahari Desert where the journey begins to the nutrient rich lands of the Okavango Delta. Wood and local safari guide Kane Motswana, a San bushman who grew up in the wilds, gives the Animal Planet audience unmatched access to the dangers these resilient animals must overcome – poachers, predatory wildlife and dehydration – to arrive at their destination. But this up-close and first ever on the ground look at this elephant migration doesn’t come without risks; Wood has his own terrifying close calls with wildlife that includes lions, hippos, crocodiles and even the elephants themselves.

Wood, known for his earlier work on “Walking the Nile” and “Walking the Americas”, travels more than 650 miles by foot, as he follows the elephants on their epic migratory route to gain all-new insight into this still mysterious journey – one that the elephants have done for thousands of years, which no person has done on foot. Until now.”

Check out the preview for the Animal Planet event series below.

What do you think? Are you going to check out Walking with Elephants on Animal Planet?