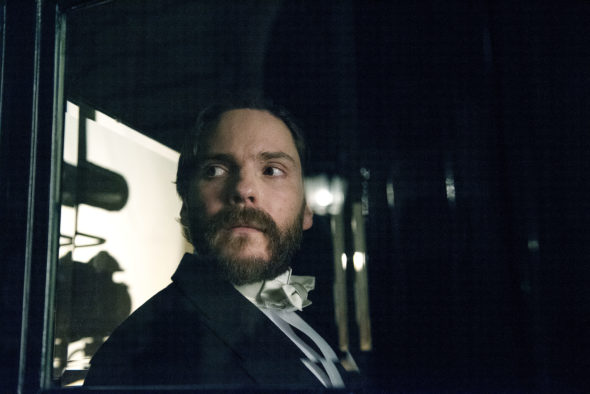 Has Teddy Roosevelt’s secret crime task force found their serial killer? Is The Alienist TV show cancelled or renewed for a second season on TNT? The television vulture is watching all the latest cancellation and renewal news, so this page is the place to track the status of The Alienist, season two. Bookmark it, or subscribe for the latest updates. Remember, the television vulture is watching your shows. Are you?

The first season of The Alienist averaged a 0.41 rating in the 18-49 demographic and 1.77 million viewers. Learn how The Alienist stacks up against other TNT TV shows.

Although it premiered with very good numbers for a cable drama, the ratings have been dropping pretty quickly. Will TNT cancel or renew The Alienist for season two? I suspect this show will squeek out a renewal but it could easily be cancelled. I’ll update this page as needed. Subscribe for free alerts on The Alienist cancellation or renewal news.

6/13/18 update: Cast members have confirmed that the series ended with one season, though they’d be open for a second season. Details here.

5/21/20 update: TNT has changed the title of the sequel series to The Alienist: The Angel of Darkness and is treating it like a second season.

What do you think? Did you think that The Alienist TV show would be renewed for season two? Will you watch the sequel series?

Yes and please don’t cancel the series. I love it. One of the best shows on TNT along with Animal Kingdom.

There has been too long of a delay. I have lost interest.

I hope they do a sequel. Heard something about The Angel of Darkness.