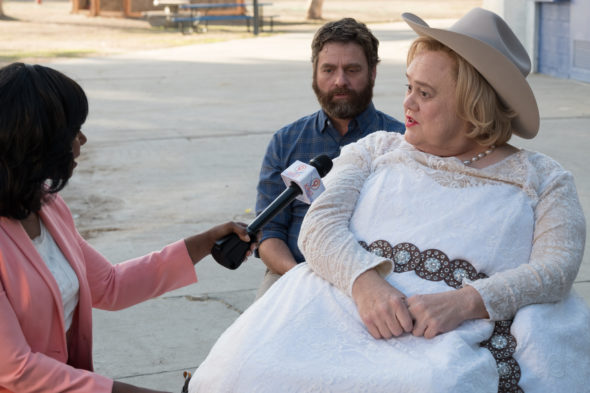 How is the show at the Baskets Family Rodeo in the third season of the Baskets TV show on FX? As we all know, the Nielsen ratings typically play a big role in determining whether a TV show like Baskets is cancelled or renewed for season four. Unfortunately, most of us do not live in Nielsen households. Because many viewers feel frustration when their viewing habits and opinions aren’t considered, we’d like to offer you the chance to rate all of the Baskets season three episodes here.

An FX black comedy, Baskets stars Zach Galifianakis, Louie Anderson and Martha Kelly. The surreal series centers on Chip Baskets (Galifianakis), who dreamt of being a classically trained French clown, but things didn’t pan out for him when he went to study in Paris. Now back home, Chip works at his judgmental family’s rodeo, headed up by his mom, Christine (Anderson). Chip has his first full-time job since he worked at Arby’s, but seems to lack the requisite skills. Although his twin brother Dale (Galifianakis) is the only one of the Baskets to have run a business, he can’t get anyone to listen to him. When she’s not otherwise distracted, at least Martha (Kelly) is able to lend a hand.

What do you think? Which season three episodes of the Baskets TV series do you rate as wonderful, terrible, or somewhere between? Should FX cancel or renew Baskets for a fourth season? Don’t forget to vote, and share your thoughts, below.

You’ll know right away if this show is for you. I was mesmerized immediately. I had to see what was going to happen next. I just watched 8 episodes from season 3, including the finale. I CAN’T WAIT til it comes back to see what happens. Each season is better than the one before, and it’s perfect for binge watching. Being able to go right into the next episode is my favorite way to watch. I am so fascinated by Louie Anderson’s performance. I can’t watch Tom Cruise movies because I just see Tom Cruise. When I’m watching Louie Anderson’s… Read more »

Renew! One of my favorite shows of all time!