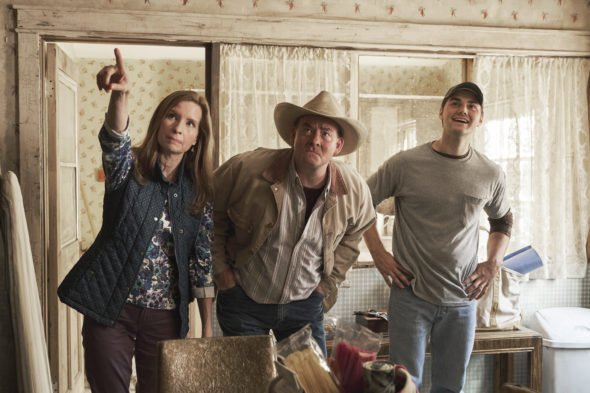 Does country living agree with Mike and Rio during the first season of the Bless This Mess TV show on ABC? As we all know, the Nielsen ratings typically play a big role in determining whether a TV show like Bless This Mess is cancelled or renewed for season two. Unfortunately, most of us do not live in Nielsen households. Because many viewers feel frustration when their viewing habits and opinions aren’t considered, we’d like to offer you the chance to rate all of the Bless This Mess season one episodes here. *Status update below.

An ABC fish-out-of-water sitcom, Bless This Mess stars Lake Bell, Dax Shepard, Ed Begley Jr., Pam Grier, David Koechner, JT Neal, and Madison Curry. The single-camera comedy centers on newlyweds Mike and Rio (Shepard and Bell), after they decide to forsake the hustle and bustle of New York City for a more pastoral life in Nebraska. Once the couple arrives in cornhusker country, it doesn’t take them too long to figure out that living a simple life requires a lot of hard work. Bell co-created the series with Elizabeth Meriwether.

What do you think? Which season one episodes of the Bless This Mess TV series do you rate as wonderful, terrible, or somewhere between? Should ABC cancel or renew Bless This Mess for a second season? Don’t forget to vote, and share your thoughts, below.

Please bring back Bless This Mess!! I haven’t laughed so hard that I cry continuously through out this show. I constantly have to hit pause so I can get myself together from laughing so much. Love love Bless This Mess! I need more of these crazy and so silly characters.

I love this show I hope they keep it on.

The whole family enjoys this show

We so love this show!!! The whole family watches it

I kept waiting for the next show. The 1st season was too short. Season 2 can’t start soon enough. Love the show!!!

I love this show! Please keep renewing it!

I love it so sweet and yet sharp