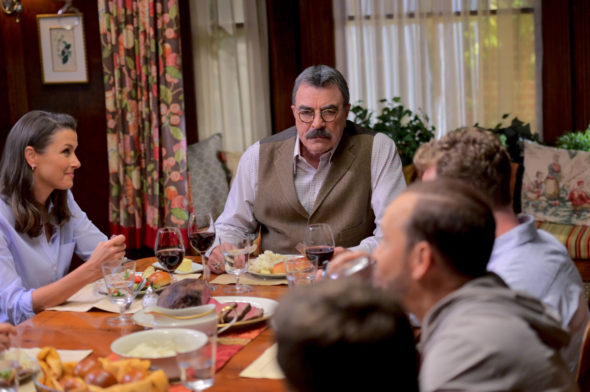 Is Frank close to retiring? Has the Blue Bloods TV show been cancelled or renewed for a 13th season on CBS? The television vulture is watching all the latest cancellation and renewal news, so this page is the place to track the status of Blue Bloods, season 13. Bookmark it, or subscribe for the latest updates. Remember, the television vulture is watching your shows. Are you?

The 12th season of Blue Bloods averages a 0.44 rating in the 18-49 demographic and 6.15 million viewers. Compared to season 11, that’s down by 18% in the demo and down by 5% in viewership in the live+same day ratings (including DVR playback through 3:00 AM). While these numbers don’t include further delayed or streaming viewing, they are a very good indicator of how a show is performing, especially when compared to others on the same channel. There can be other economic factors involved in a show’s fate, but typically the higher-rated series are renewed and the lower-rated ones are cancelled. Find out how Blue Bloods stacks up against other CBS TV shows.

Will CBS cancel or renew Blue Bloods for season 13? Despite airing on Friday nights, Blue Bloods remained one of the network’s highest-rated scripted series last year. As long as Selleck wants to continue, I think this drama will continue. If he chooses to scale back his role on the show or leave altogether (he turns 77 during this season), I think there’s a good chance that the network might still like to keep Blue Bloods going. I’ll update this page with breaking developments. Subscribe for free alerts on Blue Bloods cancellation or renewal news.

What do you think? Do you hope the Blue Bloods TV show will be renewed for a 13th season? How would you feel if CBS cancelled this TV series, instead?

This is my favorite network show. I care about the characters and hope the writers and show continue so I can find out what happens to them. I think the issues they focus on give a realistic view of the role of the police in their role to serve our communities. It especially shows how difficult police work has become. This show is timely and important for that reason alone but the family dynamics make it so very interesting

I absolutely LOVE “Bluebloods” and certainly hope that it is renewed. I have watched every episode and love all the actors and actresses and storylines on this show. I hope it is not cancelled!

I love Blue Bloods and, with the exception of Bridget Moynahan, I love the cast but the show wouldn’t be what it is today if Tom Selleck left. He’s the heart and soul of the show. I hope they renew it for several more seasons.

I love blue bloods and hope it continues. One of the best shows on TV

I would be totally devastated if Blue Bloods was canceled. It’s by far the best show ever..well tied with The Punisher. Anyway.. the cast is amazing. Of course Tom Selleck is the show..but if he did decide to leave..there is still so much that could be played out.

I really hope they renew best show around. Love this show and the actors

I really enjoy Blue Bloods and hope they continue Season 13.

I love watching blue blood I watch over snd over again the story line is always good I would hate to see this programme cancelled.

I do not think that they think about the audience outside the USA much, because has soon as it get to England the programme get cancelled

I love the show! Please keep it on.