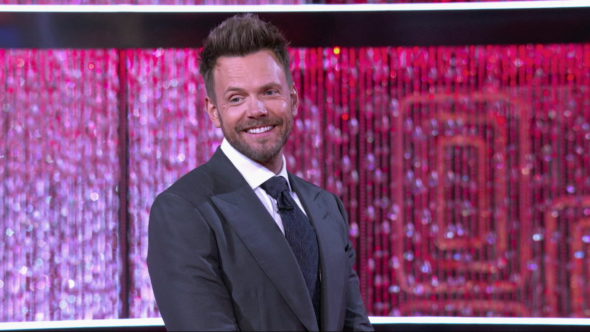 Are the cards stacked against this series? Has the Card Sharks TV show been cancelled or renewed for a third season on ABC? The television vulture is watching all the latest cancellation and renewal news, so this page is the place to track the status of Card Sharks, season three. Bookmark it, or subscribe for the latest updates. Remember, the television vulture is watching your shows. Are you?

Airing on the ABC television network, the Card Sharks TV series is hosted by Joel McHale. Based on the card game Acey Deucey, two players face off on the series, each hoping to eliminate the other, with the goal of claiming a $10,000 cash prize and a chance for even bigger winnings. The winning contestant bets their prize on properly predicting the final seven cards of the game. The player’s final prize is the amount of money remaining in the bank after all the predictions have been made and the results are revealed.

The second season of Card Sharks averaged a 0.33 rating in the 18-49 demographic and 2.25 million viewers. Compared to season one, that’s down by 46% in the demo and down by 33% in viewership. Find out how Card Sharks stacks up against other ABC TV shows.

Will ABC cancel or renew Card Sharks for season three? ABC has made game shows a staple of its summer schedule and these series can also be used to fill out the regular season’s schedule. I think Press Your Luck will be renewed but, given the much lower ratings this season, I wouldn’t be surprised if it was cancelled either. I’ll update this page with breaking developments. Subscribe for free alerts on Card Sharks cancellation or renewal news.

What do you think? Do you hope the Card Sharks TV show will be renewed for a third season? How would you feel if ABC cancelled this TV series, instead?

I’ve Decided Go Back To The Drawing Board And Do The Original Version Of Card sharks Take Away The Where you have them With Chips!

We Watch Both older versions And the new version I Think A different host .I’m still going to watch It either way !