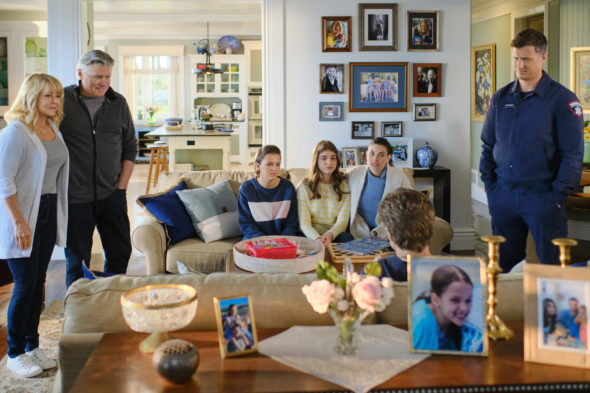 This family’s been through a lot. Has the Chesapeake Shores TV show been cancelled or renewed for a seventh season on Hallmark Channel? The television vulture is watching all the latest cancellation and renewal news, so this page is the place to track the status of Chesapeake Shores, season seven. Bookmark it, or subscribe for the latest updates. Remember, the television vulture is watching your shows. Are you?

Airing on the Hallmark Channel television network, the Chesapeake Shores TV series stars Robert Buckley, Meghan Ory, Treat Williams, Laci J. Mailey, Emilie Ullerup, Brendan Penny, and Andrew Francis. The store explores the lives of the O’Brien family, after the homecoming of eldest daughter Abby O’Brien (Ory), a high-powered career woman and divorced mother of two. In season six, the O’Brien family comes together in the aftermath of Connor’s (Francis) heart attack. Jess (Maily) and David (Carlo Marks) start to deal with the media fallout after Dennis Peck (Malcolm Stewart) goes on the run, and lean on one another for support. Abby finally reveals to her family who she called at the end of season five and this leads to an unexpected yet exciting first date. Meanwhile, Mandrake (Wesley Salter) and Kevin (Penny) talk about their difficult past.

The sixth season of Chesapeake Shores averages a 0.12 rating in the 18-49 demographic and 1.38 million viewers in the live+same day ratings (includes all DVR playback through 3:00 AM). Compared to season five, that’s up by 19% in the demo and down by 6% in viewership. While these numbers don’t include further delayed or streaming viewing, they are a very good indicator of how a show is performing, especially when compared to others on the same channel. There can be other economic factors involved in a show’s fate, but the higher-rated series are usually renewed and the lower-rated ones are cancelled. Find out how Chesapeake Shores stacks up against other Hallmark Channel TV shows.

We don’t have to wonder about the immediate future of Chesapeake Shores on Hallmark Channel. It’s already been announced that the drama is ending. Could it be revived for a seventh season someday?  Subscribe for free alerts on Chesapeake Shores cancellation or renewal news.

What do you think? Do you wish that the Chesapeake Shores TV show had been renewed for a seventh season? Are you disappointed that this Hallmark Channel TV series is ending?

Please renew this for another few seasons as the characters can do so much more in all their lives, so Chesapeake Shores can continue for at least three more seasons.

Should have been renewed. One of their best.

It is a shame this show is canceled. Hoping another network will pick them up in the future!