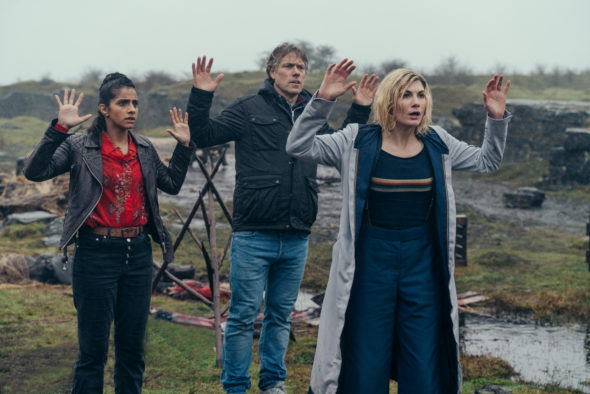 Which monsters will be the biggest threat in the 13th season of the Doctor Who TV show on BBC and BBC America? As we all know, the Nielsen ratings typically play a big role in determining whether a TV show like Doctor Who is cancelled or renewed for season 14. Unfortunately, most of us do not live in Nielsen households. Because many viewers feel frustrated when their viewing habits and opinions aren’t considered, we invite you to rate all of the 13th season episodes of Doctor Who here.

A BBC America science-fiction drama, the 13th season of the Doctor Who revival stars Jodie Whittaker as the Thirteenth Doctor, an alien Time Lord from the planet Gallifrey. The Doctor travels through time and space in the TARDIS, which appears to be a British police box on the outside, with traveling companions Yasmin Khan (Mandip Gill) and Dan Lewis (John Bishop). Jacob Anderson recurs. Guest stars in season 13 include Robert Bathurst, Thaddea Graham, Blake Harrison, Kevin McNally, Craig Parkinson, Sara Powell, Annabel Scholey, Gerald Kyd, and Penelope Ann McGhie.

What do you think? Which season 13 episodes of the Doctor Who TV series do you rate as wonderful, terrible, or somewhere between? Are you glad that Doctor Who has been renewed for a 14th season on BBC America? Don’t forget to vote, and share your thoughts, below.

It was too disjointed and ended up more confusing and unsatisfying. Chin all continues to disappoint as a writer. The cast, except for Mr Bishop is underwhelming and the effects, while professional in looks were seemingly an attempt to mimic the disintegrating from the Avenger Infinity war film. Overall, the production was quality but unoriginal. The writing was choppy and the acting was largely uninspired.