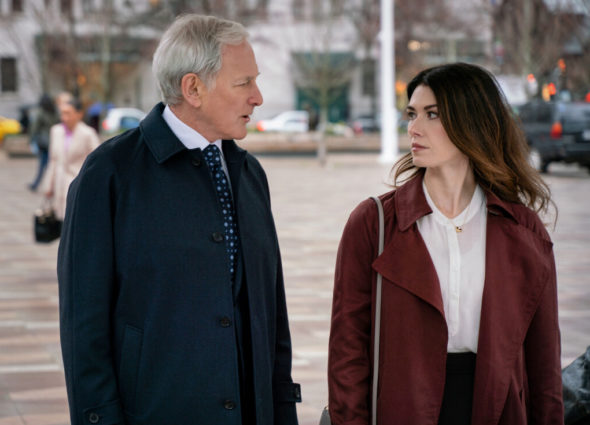 Perhaps Abby’s probation requirement isn’t really a punishment. Has the Family Law TV show been cancelled or renewed for a second season on The CW? The television vulture is watching all the latest cancellation and renewal news, so this page is the place to track the status of Family Law, season two. Bookmark it, or subscribe for the latest updates. Remember, the television vulture is watching your shows. Are you?

Airing on The CW television network, the Family Law TV show stars Jewel Staite, Victor Garber, Zach Smadu, Genelle Williams, Lauren Holly, and Bobbi Charlton. In the story, Abigail Bianchi (Staite) is a lawyer and a recovering alcoholic. She’s struggling to put her career and family back together after hitting rock bottom. As a condition of her probation, Abby is required to work at Svensson and Associates, the law firm of her estranged father, Harry (Garber) law firm. She’s practicing family law for the first time and finds herself managing not just her clients’ family dysfunction, but her own. In addition to navigating a relationship with her father, Abby is also working with her attorney half-brother, Daniel (Smadu), and her psychiatrist half-sister, Lucy (Williams) — two people she’d never met.

The first season of Family Law averages a 0.05 rating in the 18-49 demographic and 298,000 viewers in the live+same day ratings (including DVR playback through 3:00 AM). While these numbers don’t include further delayed or streaming viewing, they are a very good indicator of how a show is performing, especially when compared to others on the same channel. There can be other economic factors involved in a show’s fate, but typically the higher-rated series are renewed and the lower-rated ones are cancelled. Find out how Family Law stacks up against other The CW TV shows.

Will The CW cancel or renew Family Law for season two? This show originates in Canada and is licensed by The CW, so it doesn’t cost the network as much to air. Family Law has already been renewed for a second and a third season in Canada, so I think there’s a very good chance that The CW will air them too. I’ll update this page with breaking developments. Subscribe for free alerts on Family Law cancellation or renewal news.

What do you think? Do you hope that the Family Law TV show will be renewed for a second season on The CW? How would you feel if this TV series were cancelled instead?

I love this series I hope CW picks up season 2

This show has been renewed for 2 more seasons that quick. I really hope that is true. Because I really like this show.