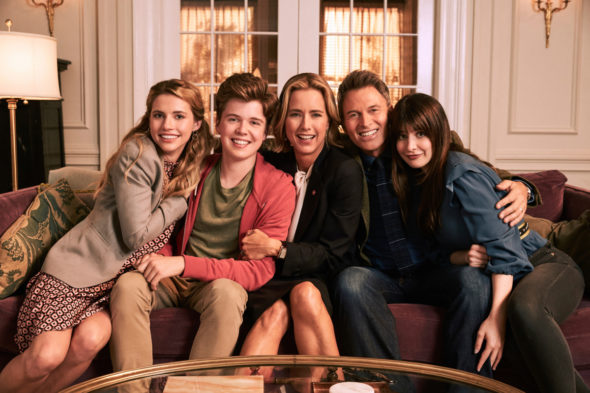 How long will Elizabeth McCord remain Secretary of State? Has the Madam Secretary TV show been cancelled or renewed for a sixth season on CBS? The television vulture is watching all the latest TV cancellation and renewal news, so this page is the place to track the status of Madam Secretary, season six. Bookmark it, or subscribe for the latest updates. Remember, the television vulture is watching your shows. Are you?

The fifth season of Madam Secretary averaged a 0.56 rating in the 18-49 demographic and 5.41 million viewers. Compared to season four, that’s down by 9% and 12%, respectively. Find out how Madam Secretary stacks up against the other CBS TV shows.

Will CBS cancel or renew Madam Secretary for season six? This show’s numbers haven’t been very good but it’s hung on just the same. I could see this being the final year but suspect they’ll give it one last renewal. Subscribe for free updates on any Madam Secretary cancellation or renewal news.

5/9/19 update: CBS has renewed Madam Secretary for a sixth season.

What do you think? Are you glad that the Madam Secretary TV show has been renewed for a sixth season? Would you have been upset if CBS had cancelled this TV series instead?

Perhaps you should change the timeslot. It is an excellent show but is always competing with other good shows.

Was so sad when Madame Secretary was cancelled after season 5. But by accident saw that there was a season six. Please keep this show going it’s absolutely brilliant. There are still plenty of story lines that can be written. Why do brilliant series keep getting cancelled?

My husband and I faithfully watch Madam Secretary every week its on ! This country needs more shows like this positive role model for women. It even puts politics in a more positive and intelligent light. Please bring back Madame Secretary as Madam President in 2020 and let her viewers enjoy how she solves world and national problems and allows us to follow a dynamic first family. Leone does a wonderful job as does the rest of the cast.

I will be monumentally distressed if Madam Secretary is not renewed! It is well-written, timely, wonderfully acted and a highlight of my television-watching on a weekly basis! Having the family leaving on a cross-country train trip and “ride off into the sunset” as if it was an old-time Western might have been clever but it was a shock to realize that that might have been the final episode! Please do NOT do that to this high-quality, intriguing, entertaining production!

My husband and I faithfully watch this show. I was hoping maybe they would bring it back as maybe Madam president! I think Leone is straight forward and I love her brassiness!