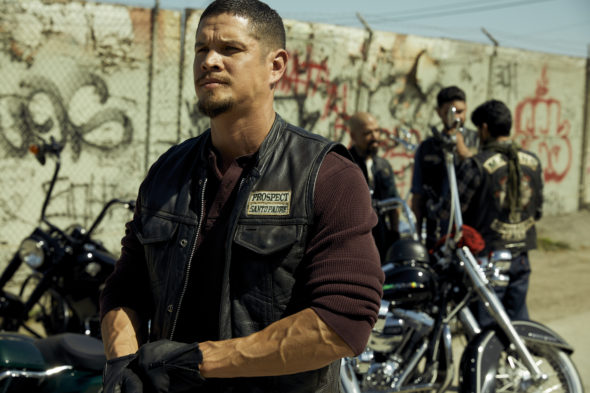 TV show description:
From co-creators Kurt Sutter and Elgin James, the Mayans MC TV show is a spin-off of Sons of Anarchy. The drama unfolds after the death of Jax Teller (Charlie Hunnam) and centers on Ezekiel “EZ” Reyes (Pardo).

Newly released from prison, EZ is a prospect in the Mayans Motorcycle Club (i.e. Mayans MC) charter on the California–Mexico border. Once a golden boy with a bright future, now EZ has to start all over and establish a life for himself.

EZ’s brother, Angel (Cardenas), is already a full-patch member of the Santo Padre charter of Mayans MC. That their Mexican family never had such high hopes for Angel weighs on him. As a result, he’s stingy with his love and even tighter with his trust.

Their father, Filipe (Olmos), has been ground down by a life of hard labor and gun violence. He longs for his sons to follow the road to righteousness and prays his own dark past will never come to light.

Rounding out the cast of characters are former Army sharpshooter and weapons specialist Johnny ‘Coco’ Cruz (Cabral), a  full member, Miguel Galindo (Pino), the Ivy League-educated son of the founder of the Galindo cartel, and Alelita (Baratta), whose family died at the cartel’s hand. Determined to exact an “eye for an eye,” Adelita mentors other Mexican orphans.

The son of a dignified family, EZ was poised to live out the American dream, until border violence changed everything. These days, he is fueled by the desire for vengeance and racing toward a life he will never be able to escape. Meanwhile, his childhood sweetheart, Emily Thomas (Bolger), has traded in her old ways for a life of luxury.

What do you think? Do you like the Mayans MC TV series? Should this FX TV show be cancelled or renewed for another season?

Don’t blow this one, It’s a good series with good acting. Keep it going

I love the Mayan show!

I LOVE THIS SERIES.. JUST REALLY GOT HOOKED

When is season 3 of the Mayans returning to TV its one of the best shows on TV?