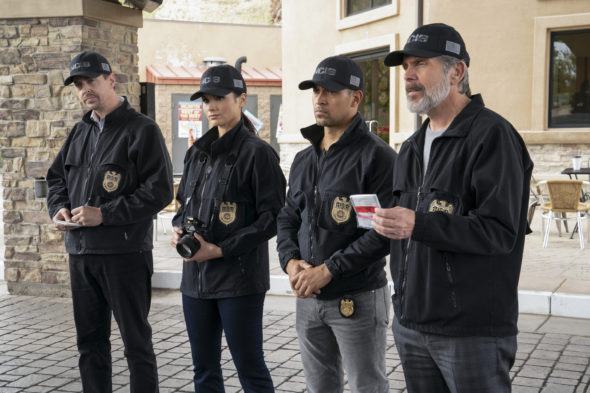 Can Parker keep this team together? Has the NCIS TV show been cancelled or renewed for a 21st season on CBS? The television vulture is watching all the latest cancellation and renewal news, so this page is the place to track the status of NCIS, season 21. Bookmark it, or subscribe for the latest updates. Remember, the television vulture is watching your shows. Are you?

The 20th season of NCIS averages a 0.041 rating in the 18-49 demographic and 5.96 million viewers. Compared to season 19, that’s down by 28% in the demo and down by 19% in viewership in the live+same day ratings (includes DVR playback through 3:00 AM). While these numbers don’t include further delayed or streaming viewing, they are a very good indicator of how a show is performing, especially when compared to others on the same channel. There can be other economic factors involved in a show’s fate, but typically the higher-rated series are renewed and the lower-rated ones are cancelled. Find out how NCIS stacks up against other CBS TV shows.

Will CBS cancel or renew NCIS for season 21? Despite Harmon’s departure last season, NCIS has remained one of the network’s most-watched series and is likely a bit cheaper to produce. NCIS is produced by CBS Television Studios which means that the company profits from the network airings as well as syndication and international sales. I have no doubt that this show will be renewed and will likely air for many years, changing out cast members as needed (ala Law & Order). I’ll update this page with breaking developments. Subscribe for free alerts on NCIS cancellation or renewal news.

What do you think? Do you hope that the NCIS TV show will be renewed for a 21st season? How would you feel if CBS cancelled this TV series, instead?

Don’t want NCIS cancelled, but it needs more action and more creative plots. Need to replace Katrina Law. She’s boring. Maybe I’m use to Ziva, but Law is still not interesting, the rest is okay. Just make their characters worth watching.

I Love Casey and Abby. If only Abby and Casey could be best friends and work together I think that would be great. I also love Nick and Jessica. But I wish Eleanor Bishop was back To work together with everyone else don’t take Nick and Jessica off but we also want to see some of the older people back on there we missed them that’s what kept us going Gibbs is what keeps me going I love Gibbs and I love everybody on there But it’s just different With Parker running everything When it should be Gibbs running everything… Read more »

Please don’t cancel NCIS season 20. I think more people would watch more if Mark Harmon came back as Leroy Jethro Gibbs and bring back Abby and Tony and Ziva. We like things as they were.

Please don’t cancel, I enjoy these shows! – there are fewer shows I enjoy on the regular channels these days!

They can cancel as I don’t watch it any more, doesn’t have th3e appeal as before !!!!!