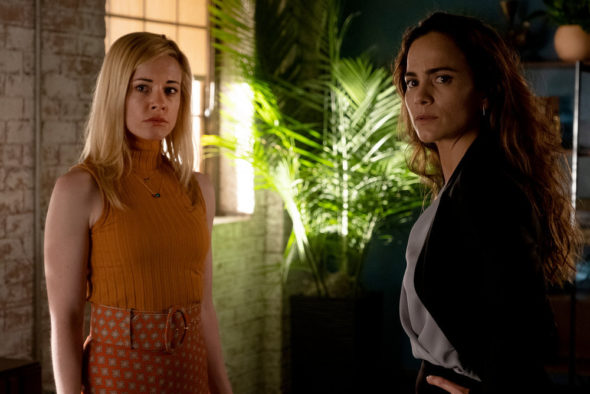 Can this series possibly have a happy ending? Has the Queen of the South TV show been cancelled or renewed for a sixth season on USA Network? The television vulture is watching all the latest cancellation and renewal news, so this page is the place to track the status of Queen of the South, season six. Bookmark it, or subscribe for the latest updates. Remember, the television vulture is watching your shows. Are you?

Airing on the USA Network cable channel, Queen of the South stars Alice Braga, Hemky Madera, Peter Gadiot, and Molly Burnett. The story follows Teresa Mendoza (Braga), a poor woman from Mexico on the run from a powerful drug cartel, who seeks refuge in the United States. She eventually rises to power, operating her own drug-trafficking empire. In season five, Teresa finally embraces her Queenpin status and all that comes with it. While she’s tried to maintain a strong moral code and lead with her heart, those values have begun to compromise her ability to stay on top. Now, Teresa must make tough decisions when it comes to those closest to her, all while continuing her quest for even more power.

The fifth season of Queen of the South averaged a 0.19 rating in the 18-49 demographic and 708,000 viewers. Compared to season four, that’s down by 33% in the demo and down by 23% in viewership. Find out how Queen of the South stacks up against other USA Network TV shows.

We don’t have to wonder if USA Network will cancel or renew Queen of the South. The cable channel has already announced that season five is the end. I’ll update this page with breaking developments. Subscribe for free alerts on Queen of the South cancellation or renewal news.

What do you think? Do you wish that the Queen of the South TV show would be renewed for a sixth season? Are you sorry that season five is the end for this series or, is this a good time to wrap up the story?

Please do not cancel this series! It only got more and more amazing as the story unfolded and evolved. The last episode of season five leaves so much more left unfinished to be desired and still untold. There is defintely more amazing episodes that could be built going forward atleast another 5! Theresa has only just begun to find her true power in the world she has fought for and built why on earth you would as writer’s and producers cease giving her a more repsected ending is beyond me. The character’s are incredible and storyline is one of the… Read more »

Please please do #6..we don’t do many series..but this one is great!!!

Hello! I think that season five ends it’s both fancy and beautiful an ending for thIs show developers in response to the viewer’s systemic diminished interest.

If Netflix was smart, they’d pick it up and give us a Season 6. There’s still so much story that could be told. I could see a story line where either Camila isn’t really exiled and resumes her quest to take over and a renewed energy to find Teresa and take her out for good. Or, I could see Isabella growing up to be like momma and hunting down Teresa for the revenge of Epifano’s death, etc. There’s still so many ways it go. I mean seriously, WE NEED MORE POTE!

Bring it back. I didn’t know about this show until one month ago. I watched all four seasons in a month and now watching season five. I do not want to watch episode 10. As it will be over. Great cast great production. Great writing. Love Alice, Hemky. Peter great chemistry. I want more!!

this is another good show, just bout everyone loves a good drug lord good/bad cops show, every episode keeps you coming back for more
with everything going on we need some good TV shows that keeps u wanting more
do season 6 & 7

We need a season 6

I think another network should pick up this serial. Teresa death should come back as fake on the new network. Bring her back to revenge all who wronged her. My entire family look forward to watching the show. Sometime we get together to watch. Please bring it back!!!

Love the show there has to be more !,, watching it for second time now on USA and Netflix

This is like one of the best written television shows. Why are they canceling it? I want more!!!!

Great show shouldn’t taken so long it between seasons. Bs such a great show

I totally agree the whole reason they don’t have a season six is because season 4 when they was in New Orleans with the bad judge brung the viewings down and that’s the only reason it’s not a season 6 !!!!that is so unfair that really was my least favorite season!! I kind of didn’t even like season 4 and it takes way too long for y’all to come out with a new season you make people lose interest!!!!! I can see every 3 months a new season come out or 6 months not a whole year people move on… Read more »