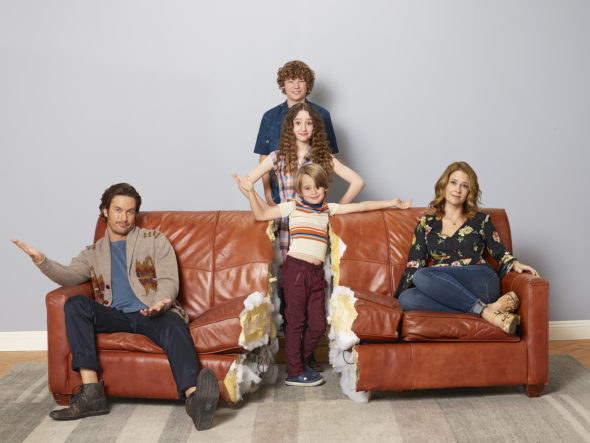 An ABC sitcom, Splitting Up Together stars Jenna Fischer, Oliver Hudson, Bobby Lee, Diane Farr, Lindsay Price, Olivia Keville, Van Crosby, Sander Thomas, and Kelsey Asbille. The family comedy centers on a married couple, Lena (Fischer) and Martin (Hudson), who have lost that lovin’ feeling. Having arrived at the conclusion that everyone would be happier if they divorced, Lena and Martin decide to split, but to minimize the impact on their three kids, they’re “bird nesting.” The parent who is on-duty in a given week lives in the house, with the children, while the other decamps to the garage. Once they’re apart, they begin to see their own failures and the other’s contributions. Splitting up together, like this, just might reignite their love.

5/11/18 update: ABC has renewed Splitting Up Together for a second season. Details here.

I love this show! Being in a less than perfect marriage where many times I thought about “throwing in the towel” this show has shown me that there are two sides, it had made me be more aware that I too didn’t dance at my wedding (I’m the wife) and maybe I should have just to make my husband happy. It also shows how adults should act when a marriage doesn’t work out. Kids with role models like that have a chance at a good future.

Enjoying this show. Keep it. I hope they eventually decide to get back together because the reason for their divorce seems petty in my long ago divorced eyes. The ex-wife’s choice not mine. Divorce deserved.

Please renew this show. My husband and I look forward to watching it every week and all my co-workers love it too. We all discuss it the next day. It’s just so enjoyable.

First and foremost, the Asian chick is too hot for that tiny dude she is with. Way too hot. That is super unrealistic. You mean to tell me that they couldn’t find a better actor for that role? I don’t believe for one second that they would be together in real life. That’s it, there isn’t a second. I’m out