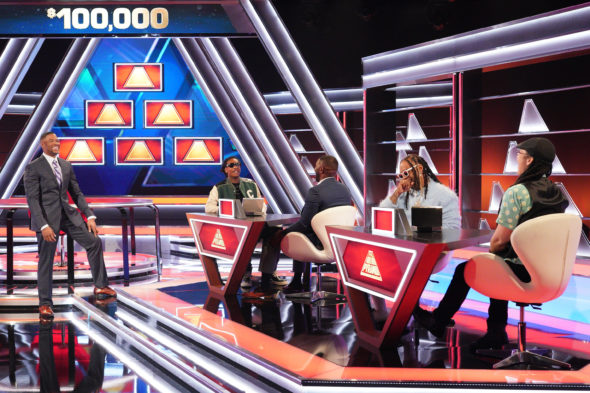 This show could be close to its end.  Has The $100,000 Pyramid TV show been cancelled or renewed for a seventh season on ABC? The television vulture is watching all the latest cancellation and renewal news, so this page is the place to track the status of The $100,000 Pyramid, season seven. Bookmark it, or subscribe for the latest updates. Remember, the television vulture is watching your shows. Are you?

Airing on the ABC television network, The $100,000 Pyramid TV series is the latest iteration of a format that launched in daytime in 1973. This newest incarnation is hosted by Michael Strahan. The competition pits two teams of two — a contestant and a celebrity — against one another. In the main game, the partners take turns helping the other guess a series of words or phrases based on descriptions given to them by their teammates. The winning team then moves onto the Winner’s Circle with a pyramid-shaped gameboard. If a team can complete the pyramid’s six categories in 60 seconds, the contestant wins $50,000. If the contestant can win the second round of the main game (teamed with the other celebrity), they can win an additional $100,000. Celebrities appearing in the sixth season include Lindsey Vonn, Russell Peters, Jason Alexander, Wayne Knight, Wiz Khalifa, Ty Dolla $ign, Bobby Moynihan, Ron Funches, Ken Jennings, Ross Mathews, RuPaul, Carson Kressley, Tayshia Adams, Matt James, Wendi McLendon-Covey, and Thomas Lennon.

The sixth season of The $100,000 Pyramid averages a 0.41 rating in the 18-49 demographic and 3.55 million viewers in the live+same day ratings (includes all DVR playback through 3:00 AM). Compared to season five, that’s down by 15% in the demo and down by 2% in viewership. While these numbers don’t include further delayed or streaming viewing, they are a very good indicator of how a show is performing, especially when compared to others on the same channel. There can be other economic factors involved in a show’s fate, but the higher-rated series are usually renewed and the lower-rated ones are cancelled. Find out how The $100,000 Pyramid stacks up against other ABC TV shows.

Will ABC cancel or renew The $100,000 Pyramid for season seven? The network cancelled several of its older and lower-rated game shows earlier this year. Pyramid escaped the reaper’s grasp but I suspect that the series is getting close to its end. I’ll update this page with breaking developments. Subscribe for free alerts on The $100,000 Pyramid cancellation or renewal news.

What do you think? Do you hope The $100,000 Pyramid TV show will be renewed for a seventh season? How would you feel if ABC cancelled this TV series, instead?