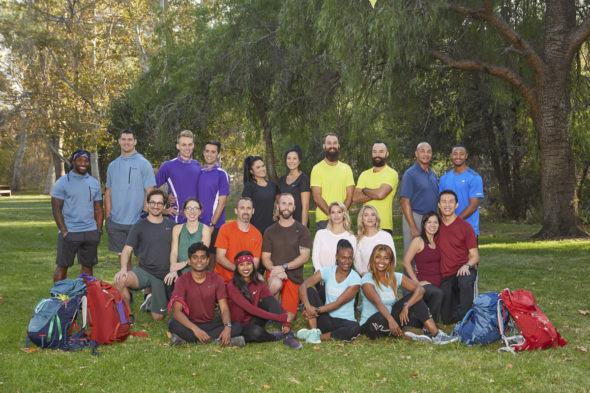 How long will this race keep running? Has The Amazing Race TV show been cancelled or renewed for a 33rd season on CBS? The television vulture is watching all the latest cancellation and renewal news, so this page is the place to track the status of The Amazing Race, season 33. Bookmark it, or subscribe for the latest updates. Remember, the television vulture is watching your shows. Are you?

Airing on the CBS television network, The Amazing Race TV show is hosted by Phil Keoghan. The competition features 11 pairs of contestants racing around the world in pursuit of a million-dollar prize. In season 32, the globe-trotting teams begin their adventure from the Hollywood Bowl in Los Angeles and travel to places like Trinidad, Tobago, France, Germany, Kazakhstan, Brazil, and more.

The 32nd season of The Amazing Race averaged a 0.68 rating in the 18-49 demographic and 3.89 million viewers. Compared to season 31, that’s down by 20% in the demo and down by 14% in viewership. Find out how The Amazing Race stacks up against other CBS TV shows.

When the pandemic hit, season 33 of The Amazing Race had already begun. For the safety of the competitors and the crew, the race was shut down and everyone returned home. It seems likely that, whenever this COVID-19 crisis ends, that season 33 will resume or restart. Though unlikely, there is a slight possibility that CBS could cancel the series because of the long delay. Several scripted shows have been cancelled for the same reason. I’ll update this page with breaking developments. Subscribe for free alerts on The Amazing Race cancellation or renewal news.

What do you think? Do you hope the 33rd season of The Amazing Race TV show will be finished? How would you feel if CBS cancelled this TV series, instead?

Disgusted to watch this season. Have you thought of back round checks on your contestants.

The amazing race started filming again in June and finished on July 5th. It airs February 9th. Can you imagine playing in February of 2020 and taking an break due to an pendimic. I mean it get bad 16 days before filming and you spend 14 days in a hotel when final picks. Witch mean we started lockdown stuff two days before they left. Would be odd to see a business owner who took on huge debt who could had been help with the amount they won. I going to look up cast job just to do that. I think… Read more »

If there are the fanale 3 teams and they win these legs. am done with the show because it was posted November 2020 and they hadn’t film yet. Meaning production plans out who wins 1st korey and conner won legs 4,5,11,12 2nd rayon and Matt won legs 8,9 and 3rd Amanda and ray legs 2,10

Will The Amazing Race ever do around all the 50 The United States including Guam San Juan and all the territories under The United States. People need to learn about our Country. Not that the Countries you have visit already wasn’t Beautiful. I just think once Covid-19 is over. We / you can do a tribute to this Country. Just a suggestion