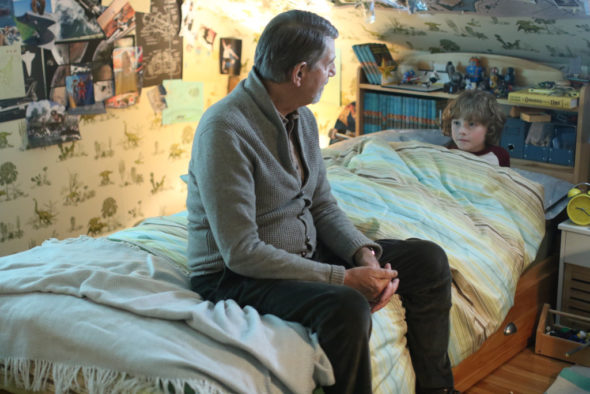 TV show description:
From Normand Daneau and Geneviève Simard, The Disappearance TV show originally debuted on Canada’s CTV in 2017. The mystery series follows the investigation into the disappearance of 10-year-old Anthony Sullivan (Riendeau).

On his tenth birthday, during a treasure hunt in honor of the day, young Anthony goes missing. The psychological drama digs into his family’s emotions as the facts of the case emerge. Although the police are on the case, the family also conducts its own investigation, looking for any possible evidence.

A real straight arrow, who recently lost his wife Margaret, Henry Sullivan (Coyote) is father to Luke (Young), and grandfather to Anthony. Upon Luke’s split from wife Helen (Sullivan), he and Anthony move into Henry’s place. Although the men are polar opposites, they do manage to bond over their love for the little boy.

While Helen and Luke have parted ways over their vast differences, they are determined to minimize the impact their split will have on Anthony’s life. As a musician, Luke is more free-wheeling, where microbiologist Helen is highly organized and always on top of things. The family also includes Luke’s sister Catherine (Kelly), a palliative care nurse.

Once the boy goes missing, the experienced Lieutenant-Detective Susan Bowden (Lanctôt) takes the case. She has a long history with Henry Sullivan, tracing back to his time as a prosecutor and judge and a prosecutor. This close to retirement, there is not much Susan hasn’t seen, but she maintains her empathy and connects deeply with the investigation.

No secret is safe in the search for the truth about Anthony. As those secrets emerge, they will have an impact on the whole Sullivan family.


What do you think? Do you like The Disappearance TV series? Should this WGN America TV show have been cancelled or renewed for season two, possibly with a new case?

Where is Episode 6 of The Disappearance? It aired on August. 13 with a scheduled repeat on Aug. 19 but it is not available On Demand or Netflix, On Demand is now saying Season 1 only has 5 episodes? What is happening here???

It should have been renewed , this is a very intriguing story it’s better than any of those cop stories they have on tv now! I can’t this was on before in 2017 I would of watched it definitely not advertised enough back then or we would be watching season 2.

Hoping the series lives up to its namesake, and disappears. If not, cancel, apply salt, and burn.

I love it. I love the characters as well.

Seems slow. Could go without the music. Can’t hear the actors over the music.