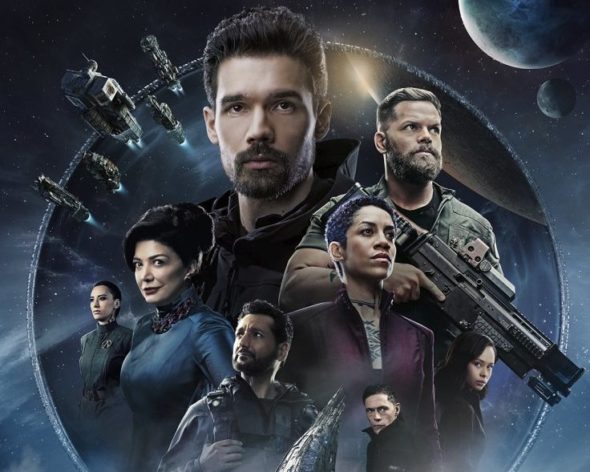 Who will survive the new conflicts? Has The Expanse TV show been cancelled or renewed for a fifth season on Amazon Prime? The television vulture is watching all the latest cancellation and renewal news, so this page is the place to track the status of The Expanse, season five. Bookmark it, or subscribe for the latest updates. Remember, the television vulture is watching your shows. Are you?

Streaming on the Amazon Prime subscription service, this show is based on the science-fiction novels by James S. A. Corey (aka authors Daniel Abraham and Ty Franck). The Expanse stars Steven Strait, Dominique Tipper, Wes Chatham, Cas Anvar, Shohreh Aghdashloo, Frankie Adams, Thomas Jane, Cara Gee, David Strathairn, and Burn Gorman. The story unfolds 200 years in the future, in a colonized galaxy, when two strangers are caught up in a vast conspiracy. In season four, with the Ring Gates now open to thousands of new planets, a blood-soaked gold rush begins. New conflicts are ignited between Earth, Mars, and the Belt. Meanwhile, on one unexplored planet, the Rocinante crew gets caught in a violent clash between an Earth mining corporation and desperate Belter settlers as deadly, new threats from the protomolecule emerge.

We don’t have to sit around wondering if Amazon Prime will cancel or renew The Expanse for season five. The show was renewed before season four was released. I’ll update this page with breaking developments. Subscribe for free alerts on The Expanse cancellation or renewal news.

11/25/20 update: The Expanse has been renewed through season six.

What do you think? Are you glad that The Expanse TV show has been renewed for a fifth season? How would you feel if Amazon Prime cancelled this TV series, instead?

This show is complex to create as the book has a rich content and an amazing anticipation vision concerning our solar system. At this area where people want to set foot on mars, this show and the political side effects anticipated must go on… and the book as well to continue the good job.

The Expanse is an amazing show, probably my favourite and one of the few my husband and I both truly love watching together so we can talk about it afterwards. I don’t have Amazon Prime yet so I have not seen season four yet and I cannot wait. We were so glad to hear Amazon had picked it up when the originating channel bailed on such a great show. Thrilled to hear there is to be a fifth and I hope many more!