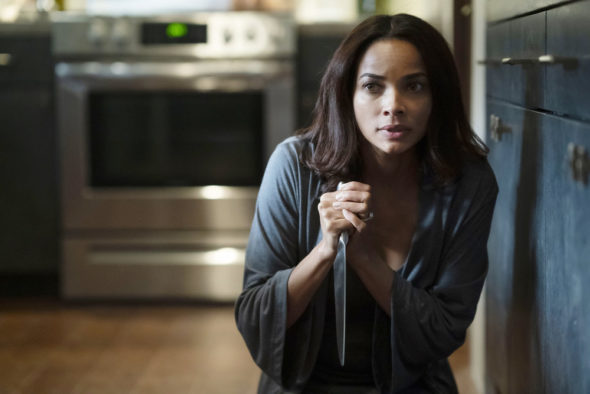 Will this show survive? Has The Purge TV show been cancelled or renewed for a third season on USA Network? The television vulture is watching all the latest cancellation and renewal news, so this page is the place to track the status of The Purge, season three. Bookmark it, or subscribe for the latest updates. Remember, the television vulture is watching your shows. Are you?

Airing on the USA Network television channel, The Purge TV show stars Derek Luke, Max Martini, Paola Nunez, and Joel Allen. Based on the movie franchise by James DeMonaco, the drama unfolds in the United States, which is under totalitarian rule. The story centers on a 12-hour period during which all crimes, including murder, are legal. The second season explores how a single Purge night affects the lives of four interconnected characters over the course of the ensuing 364 days, all inevitably leading up to the next Purge.

The second season of The Purge  averaged a 0.22 rating in the 18-49 demographic and 562,000 viewers. Compared to season one, that’s down by 46% and 48%, respectively. Find out how The Purge stacks up against other USA Network TV shows.

Will USA Network cancel or renew The Purge for season three?  The ratings are way down but the series still ranks pretty well. I think it will be renewed. I’ll update this page with breaking developments. Subscribe for free alerts on The Purge cancellation or renewal news.

5/14/20 update: The Purge has been cancelled by USA Network so, there won’t be a third season.

What do you think? Were you hoping that The Purge TV show would be renewed for a third season? Are you sorry that USA Network cancelled this TV series, instead?

We NEED a third season to tie up the Resistance story and watch the NFFA go down. The Purge is an interesting experiment to see if one night of all laws suspended, would stop violence the other 364 days of the year. But realistically, we see that it does nothing but create serial killers and corruption. Season 2 was spectacular as it slowly moved toward proving the idiocy of a Purge Night. Now I want to watch how the newly formed Resistance takes down the NFFA government and stops the Purge Night. Please renew? Of all the shows on TV,… Read more »

The NFFA will not go down in season 3 if it does happen. They make too much money off of the movies to do that.

Why is this even a maybe ? This season is epic such a good twist on the film this has so much potential to build into one of the greatest series of all time if produced right . Great work so far I say season 2 is building up a great plot ready for a third season it has to be renewed .

NO unless they go back to Original format

I would be ok with it. Even tho It’s a really fun show for me to watch & enjoy. I’m praying for Season 3’s arrival. This series deserves better.