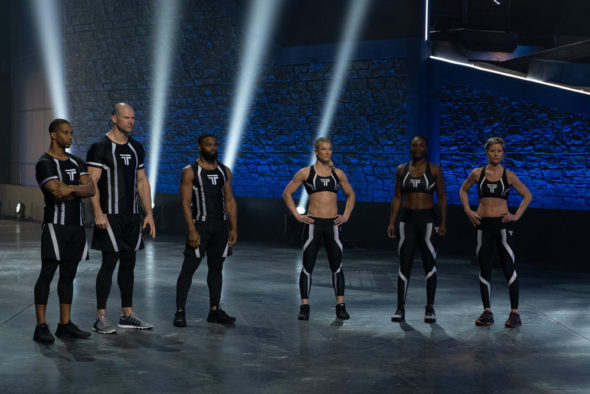 Can this series win the Nielsen ratings race? Has The Titan Games TV show been cancelled or renewed for a third season on NBC? The television vulture is watching all the latest cancellation and renewal news, so this page is the place to track the status of The Titan Games, season three. Bookmark it, or subscribe for the latest updates. Remember, the television vulture is watching your shows. Are you?

Airing on the NBC television network, The Titan Games is hosted by executive producer Dwayne “The Rock” Johnson. Sports and entertainment journalist Cari Champion and Alex “Golden Boy” Mendez provide commentary. In season two, the competition has a new format with regional brackets and the addition of Professional Athlete Titans representing each region. Competitors from a regional division compete in a best-of-three competition. The winner moves on to battle a Pro-Athlete Titan on Mt. Olympus, the consummate athletic test of speed, strength, agility, and endurance.

The second season of The Titan Games averaged a 0.73 rating in the 18-49 demographic and 3.78 million viewers. Compared to season one, that’s down by 43% in the demo and down by 25% in viewership. Find out how The Titan Games stacks up against other NBC TV shows.

Will NBC cancel or renew The Titan Games for season three? I suspect that, despite some unimpressive ratings, the show will still be renewed. I’ll update this page with breaking developments. Subscribe for free alerts on The Titan Games cancellation or renewal news.

Status update: The last episode of The Titan Games aired in August 2020, so the NBC series is presumed to have been cancelled.

What do you think? Were you hoping that The Titan Games TV show would be renewed for a third season? Are you sorry that NBC cancelled this TV series, instead?

the way that it was set up, the finals would not occur sometimes until 2 weeks later. The contestants lose steam and the whole context falls apart.

I love this show and I hope it will continue for many years.

My husband and I really liked this show and hope it is renewed for a third season.

I love the titan game I hope it’s renewed

I think the Titan games is the best reality show on. I would love to see more season to come

I am waiting for the nxt titan games to begin!!!