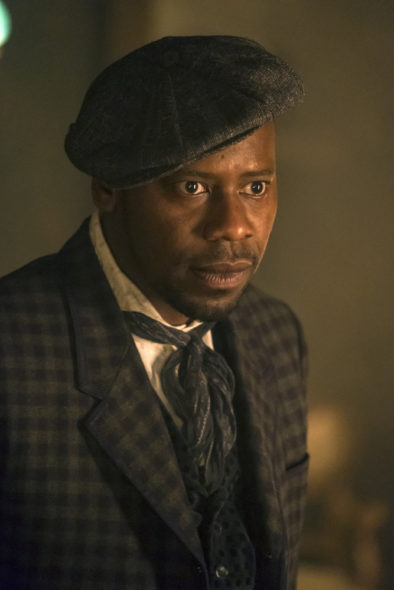 With the cancellation/renewal decision still in the network’s hands, #Clockblockers (fans of the Timeless TV show on NBC) have been hard at work pleading with the Peacock Network to renew Timeless for season three. The second season ended on an enormous cliffhanger, despite the fact that the writers didn’t know whether it would be cancelled or renewed. Now, Shawn Ryan, who co-created the series with Eric Kripke, is reminding fans what is at stake in a potential third season. Caveat lector: There are TIMELESS SPOILERS ahead.

Speaking to Entertainment Weekly, Ryan discussed how the second season came to end on a cliffhanger and what could be in store for the third season of Timeless. Check it out.

Entertainment Weekly: How long did you have the finale twists planned?

So you had a different ending planned originally?

The initial plan was that season 3 would answer how…when you have a time travel show and can go back and change history, you want to be careful with the deaths you present on the show because there’s always the thought that they may not be permanent because you can go back and tweak things. Our initial plan was, they are hell-bent on a way to save him in season 3 but then when the pitch came in to have the second lifeboat arrive, it was a great idea. When I first heard the pitch I thought, “Wow that’s actually really cool because we can actually go through with killing Rufus but still have some hope at the end.” It felt like a great emotional finish for all the turmoil that we put Lucy and Wyatt through earlier in the season — and it gives us a ton of juicy moments to explore in season 3.

So you’re saying we haven’t seen the last of Rufus [Malcolm Barrett]?

The final line of season 2 is, “You want to get Rufus, or what?” I think that implies that they are going to try and turn the clock back on Rufus’ killing. So I think it’s safe to assume they are at least going to attempt to do that.

And why did you decide to have Emma [Annie Wersching] kill Lucy’s mom Carol [Susanna Thompson] and Nicholas [Michael Rady]?

It felt like there needed to be some consequences. We never want it to feel like we’re treading water in these episodes. We started to think about how we presented Rittenhouse in the first two seasons: Carol has always defined it as blood and legacy. That’s why they went back and rescued Nicholas. And we started looking at that from Emma’s perspective and how frustrating that would be to have heritage honored over merit. Emma has been such a great villain for us and I think you even empathize with her at times. We just liked the idea that someone with her capabilities was not getting what she thinks she deserves just because of who she is. We realized Carol wavering over what to do with Lucy would ultimately result in Emma doing what she did. We’re excited about a potential season 3 coming back with a whole new Rittenhouse.

So will Emma be the big bad for season 3 if the show gets renewed?

That’s part a creative question and part a business question because Annie, who has been amazing, is a series regular on Marvel’s The Runwaways [on Hulu.] She was a recurring guest star for us this season, so we’d have to see what her schedule is going to be and if she’d be open to coming back. We have to wait until we hear about a season 3 pickup before we can have any of those conversations. If we can get her, I imagine we’d proceed with her, but if we can’t then we’d figure out going in another direction. I look at these business kind of things as a way to push you creatively.

What else can you tell us about your plans for season 3?
Well, I’m reluctant to say too much about season 3 — not because I want to keep secrets from people, but because I know things can change. At the end of season 1, we had a lot of season 2 planned, but a lot of that changed by the time we actually started crafting the episodes. I’d be lying if I said I knew for sure what happens in season 3 because you’re always one writer’s idea away from heading in a completely different direction. If and when we get the greenlight for season 3, we’ll assemble the team and see where we end up.

If you want to join the fan effort to get Timeless renewed for season three on NBC, head over to Twitter and look for people using the #Timeless and #RenewTimeless hashtags. Follow Eric Kripke, Shawn Ryan, the Timeless Writers’ room, and the official Timeless account. Send your polite renewal requests in the direction of NBC Entertainment and Sony (which produces the drama).

Are you tired of Nielsen households telling the rest of us what’s worth watching? Express yourself. Rate all the episodes in the second season of Timeless, by clicking on the “vote now” button, in the banner below.

What do you think? Did you watch the Timeless TV series’ season two finale? What did you think of the cliffhanger? Should NBC cancel or renew Timeless for a third season? Sound off, in the comments.

Don’t be foolish, this show needs to be renewed or picked up by another studio. There aren’t enough smart shows, I have never been a big fan of reality tv they are lazy programming. As for the same old sitcom or cop tv shows, Timeless was great episodic television. Do the right thing!!!!

Please renew timeless. This is a series that is different than anything else currently available on television. It is creative, entertaining, and touches on history. Your viewers aren’t interested in the same old same old. Please keep this innovative series in your programming line up. It is truly one of the few things I watch on NBC!

I’m waiting like the other timeless fans to see if there will be a season 3. Season ended in a cliffhanger team shocked about leaving rufus in time. Is he alive or dead? Can they get him home all we fans can do is wait and hope we find out soon. so bring back this great show. I enjoy watching where the team will go in time each week. hope we fans can keep on watching so bring it back Randy Burton

TIMELESS stories can be limitless – choosing time travel as it’s theme. I look forward to Season 3 & 4 – because the vast(American) historic archives (as well as educate) > Build upon season 2 as there are so many directions it can go. Agree with Roseinva , Tired of following a series left hanging with a TV movie ending it would encourage me to buy the series with an ENDING. Much sooner watch TIMELESS series 3 & 4.

I really hope Timeless is renewed for season 3, and if not at least a TV movie to give it a proper ending

Timeless is one of the best shows on NBC. It has a strong fan base and would get great ratings if it could be sold to other networks with more episodes. Please renew it for a third season!

Everyone in our family loves Timeless, my hubby and I watch it together always, please renew it, it’s an amazing show.

Timeless season 2 is on sale for 13 bucks in any digital store since last week, if you love the show you should buy it and if you didn’t love it and just watched it through illegal ways the show would cancel as predicted, This is the last chance for loyals.
Be a true fan. Not just a talking one here.

Horrible ratings this season. NBC picked the Timeslot. Without Netflix getting involved or the show being moved to the summer and a small number of episodes being ordered, it is a goner.

Well, I agree that the time slot they had did NOT help their cause at all but the small amount of episodes ordered in Season 2 is due to the amount of money it takes to produce these episodes.
I’ll take quality over quantity anyday.
As for it being a goner? Millions of Timeless fans like me disagree with you…..Sorry, not sorry.
I’m going out on a limb and say you’re not a fan and if you are, you’re not much of an optimistic one.

So much to explore..and one of the smartest shows out there… Sick of all the same old rehash shows…. SEASON 3 PLEASE!!!!! MAKE IT SO!!!

PLEASE NBC renew this wonderful show, which is the best on TV. Love the characters and stories.

I think Timeless should be renewed because it the best show on TV. It is the only network show that I watch. The show is also family friendly. The whole family can enjoy this show. Not many shows can say that they are shows for the whole family. My family lives Timeless so please don’t cancel it. Please don’t leave the fans of Timeless hanging.