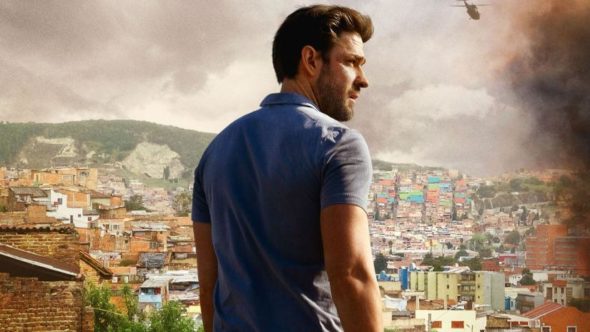 How far will Jack Ryan go to uncover the truth? Has the Tom Clancy’s Jack Ryan TV show been cancelled or renewed for a third season on Amazon Prime? The television vulture is watching all the latest cancellation and renewal news, so this page is the place to track the status of Tom Clancy’s Jack Ryan, season three. Bookmark it, or subscribe for the latest updates. Remember, the television vulture is watching your shows. Are you?

Released on the Amazon Prime streaming service, Tom Clancy’s Jack Ryan stars John Krasinski, Wendell Pierce, Noomi Rapace, and Michael Kelly. In the second season, after tracking a potentially suspicious shipment of illegal arms in the Venezuelan jungle, CIA Officer Jack Ryan (Krasinski) heads down to South America to investigate. As Jack’s investigation threatens to uncover a far-reaching conspiracy, the President of Venezuela launches a counter-attack that hits home. This leads Jack and his fellow operatives on a global mission — spanning the United States, UK, Russia, and Venezuela — to unravel the President’s nefarious plot and bring stability to a country on the brink of chaos.

What do you think? Are you glad that the Tom Clancy’s Jack Ryan TV show has been renewed for a third season? How would you feel if Amazon had cancelled this TV series, instead?

Glad for third season, wish 6 months, not a year