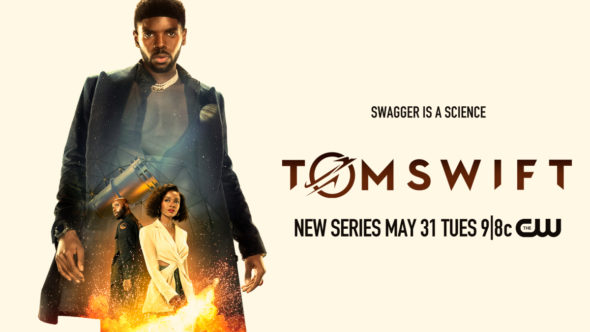 In the past, most scripted CW series (particularly ones based on existing properties) have been renewed year after year. However, with the network’s future in flux, a TV series’ ratings matter more than ever before. Will Tom Swift be cancelled or renewed for season two? Stay tuned. Status Update Below.

A mystery drama inspired by the adventure book series, the Tom Swift TV show stars Tian Richards, Ashleigh Murray, Marquise Vilsón, April Parker Jones Albert Mwangi, and LeVar Burton. As a wealthy and brilliant inventor, Tom Swift (Richards) is a man with the world in the palm of his hand. But that world gets shaken to its core after the shocking disappearance of his father. Tom is thrust into a breathtaking adventure full of mysterious conspiracies and unexplained phenomena. Fortunately, he’s able to rely on his closest companions: best friend and business visionary Zenzi (Murray); bodyguard Isaac (Vilsón), who has feelings for Tom; and Tom’s insightful AI, Barclay (voiced by Burton). At home, Tom’s relationship with his mother Lorraine (Jones) becomes conflicted as she urges him to take his father’s place in elite Black society. Meanwhile, the mysterious and dangerous Rowan (Mwangi) intersects Tom’s path with hidden motivations and undeniable mutual chemistry.

What do you think? Do you like the Tom Swift TV series on The CW? Should it be cancelled or renewed for a second season?

Plenty of shows with “white” have and will be cancelled. Stop doing what mainstream has taught, make everything about race or gender where no one can even criticize or be told they’re ‘ ists or ‘phobes. I’m black and don’t care for it…race not involved. Only thing I’ll give is the part about not having drugs or rap involved. Maybe you’ll understand… won’t hold breath… we’re too far gone with using race card, but black people having caught on but they’re called names by their own for not playing victim.

For a diverse show would rather see Naomi or Black lighting