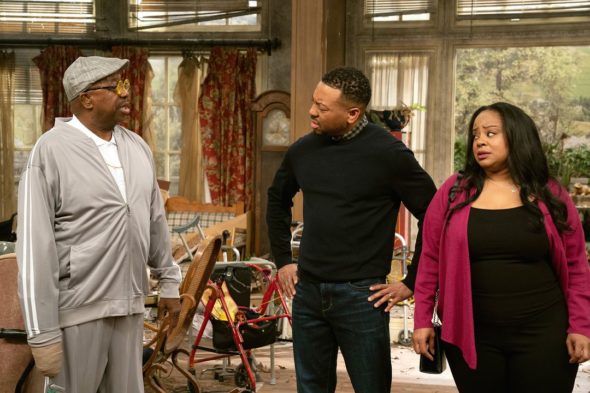 Have the Browns made a mistake in the first season of the Assisted Living TV show on BET? As we all know, the Nielsen ratings typically play a big role in determining whether a TV show like Tyler Perry’s Assisted Living is cancelled or renewed for season two. Unfortunately, most of us do not live in Nielsen households. Because many viewers feel frustrated when their viewing habits and opinions aren’t considered, we invite you to rate all of the first season episodes of Tyler Perry’s Assisted Living here.  *Status Update Below.

A BET family sitcom, Tyler Perry’s Assisted Living features the return of main characters from  Tyler Perry’s Meet the Browns, which ran on TBS for five seasons. The new show stars David Mann, Tamela Mann, J. Anthony Brown, Na’im Lynn, Courtney Nichole, Tayler Buck, and Alex Henderson. In the story, Jeremy (Lynn) loses his job so he and his young family (Nichole, Buck, and Henderson) move to the backwoods of Georgia to help his eccentric grandfather. Jeremy’s Grandpa Vinny (Brown) has foolishly purchased a terribly run-down home for the elderly and he is in way over his head. Vinny’s prayers are answered (sort of) when Mr. Leroy S. Brown (David Mann) and his daughter, Cora (Tamela Mann) show up as needy investors.

What do you think? Which season one episodes of the Assisted Living TV series do you rate as wonderful, terrible, or somewhere between? Do you think that Tyler Perry’s Assisted Living should be cancelled or renewed for a second season on BET? Don’t forget to vote, and share your thoughts, below.

Please put this show back on we need it to show the truth. I’m sitting here right now watching your show this is one of my favorite especially brown

I must say, I thought this show would be a big hit; but after looking at several shows; I disagree with it being renewed. They show kinda makes no sense and the acting from the father and mother is terrible. I think the young boy and girl are good actors but they need to be place on another show. Even the storyline doesn’t make sense. I feel like Tyler set the show up then left it in the hands of anybody!! I mean, do Tyler Perry actually review his shows after they air?!?! Even the House of Paynes isn’t that… Read more »

I live this show looking forward to more laughs